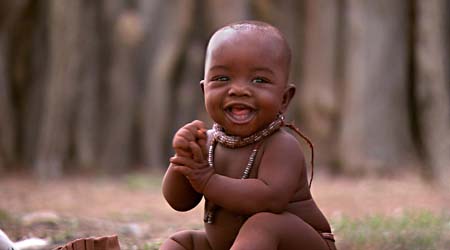 What could possibly be more lovable than a documentary about emperor penguins marching through the Antarctic fulfilling their biological imperative? How about a documentary about human babies around the world fulfilling their biological imperative? Babies are cute and fairly irresistible: the equivalent of onscreen catnip, even for those who consider themselves indifferent to an infant’s coo. This feature-length film is akin to a nature documentary in its exclusive focus on human babies in their natural habitats. However, there is no voiceover narration in Babies to explain or comment on what we are seeing. Four babies from around the world are the film’s subjects: Ponijao in Namibia, Bayarjargal in Mongolia, Mari in Tokyo, and Hattie in San Francisco. French director Balmes cross-cuts throughout the film to capture various stages in the babies’ development – feeding, walking, mimicking, etc. – although oftentimes the connections among them seem more visual than thematic. The point I think Balmes is trying to make is that human babies are universal, that they have more commonalities than differences. I think this but am not sure since Balmes’ images don’t fully speak for themselves (and, of course, neither do the preverbal babies). At any rate, this conclusion is hardly revelatory. The film pays no attention to the cultural influences or, at most, deals only in broad generalities, as when we see the baby living in the Mongolian yurt being visited while in his washbasin by a thirsty goat and the baby in Tokyo being held in her father’s arms while showering. Apart from the vagaries of hygienic standards, Babies never examines cultural or social differences. For instance, we only see fathers involved in child-rearing activities in Tokyo and San Francisco; in these two families the children observed are also first-born or only children. The Mongolian child has an older brother who delights in teasing him; the Namibian infant appears to be the most recent of many babies born to that mother, making that mom the most experienced and/or knowledgeable of the bunch. Yet none of her children has been exposed to mommy-and-me yoga classes or a bedroom full of Playskool toys. It’s an old argument: whether nature or nurture has a greater influence in childhood development. The unmediated nature documentary Babies clearly makes a case for the former. With its fantastic images, which prompt us to grin in unison and nod in knowing recognition, this documentary is as soothing and edifying as watching a video loop of the Yuletide log.