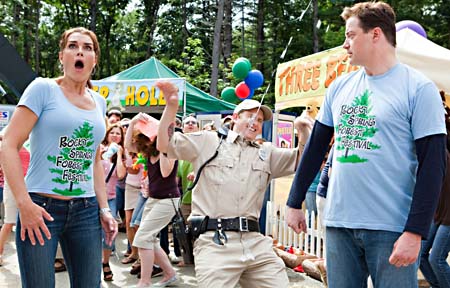 Ah, the creatures of the forest. In this movie, the cute little anthropomorphized furries have been accorded the same rights as humans when it comes to protecting their homesteads from outside invasion. What? There are no interspecies laws regarding eminent domain? I guess that's why the digitally enhanced protagonists of Furry Vengeance vigorously defend their property lines from human encroachment when a home builder starts clear-cutting their land. Is there a message in Furry Vengeance? You bet. Is there a saving grace? Yup: The animal cuties don't talk. Filmed with the flavor of a live-action cartoon, Furry Vengeance is likely to hold the greatest appeal for young audience members as its version of wascally wabbits (here a raccoon and its minions) humiliate, trounce, befuddle, and conquer their metaphorical Elmer Fudd (in this case Fraser, who, ever since his breakout in Encino Man, has selected roles in which he portrays something of a human cartoon). Fraser plays Dan Sanders, the project manager of a new housing subdivision being built in Rocky Springs. He lives in the development's model house with his wife (Shields, now rocking mom jeans instead of her Calvin's) and teenage son (Prokop, a shaggy High School Musical 3 dreamboat). The suddenly ubiquitous Jeong plays the scurrilous financier of the housing development. "He's not eco-friendly," Dan remarks late in the game. "He's not even friendly." The forest animals spend most of the picture inflicting mayhem and bodily harm on Dan (everything from aiming the lawn sprinkler at his crotch to knocking him about in a portable toilet, although you wouldn't be surprised if an Acme anvil fell on his head). Fraser uses his genial countenance and puffy gut for laughs while his family, the construction crew, and the locals all think he's gone mad. The community's Forest Festival provides the set-piece for the film's reconciliatory finale. Furry Vengeance would be innocuous enough if only it didn't look as though no effort was made to expand the images past the storyboard phase. Indifferently filmed, Furry Vengeance appears as though no more than an afternoon or two was spent on the set. The film will remind some of Over the Hedge, but, fortunately, the target audience for Furry Vengeance will be too young to remember that film from just a few years ago and maybe wet enough behind the ears to heed the film's simplistic eco-message. 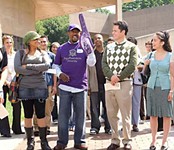