The long-scuttled tragic story of the lives of Ida Dalser, the first wife of Benito Mussolini, and their child, Benito Albino (Mussolini’s first-born), is brought to the screen with arresting style by Italian director Bellocchio. In death as in life, Ida’s claim to primacy fell on deaf ears, as it was Il Duce’s desire to quash her claims and letter-writing campaign once he married another woman during World War I. An inconvenient woman par excellence, as painted by Bellocchio, Ida Dalser and her son were kept under house arrest while Mussolini’s minions had their marriage record erased from Milan’s public records (though they overlooked a separate legal document in which the rising political leader acknowledged young Benito as his son). Later, mother and son were separated: Ida to mental asylums where she lived out her days, protesting her imprisonment until the end; Benito to an adoption by a political functionary and schooling that tried to erase his last name, never seeing his mother again, and dying at the age of 26 in an institution. Even the majority of Italians who appeared to believe that Ida was telling the truth and not a madwoman nevertheless thought she should hold her tongue and merely bask in the reflected glory of bearing the beloved Il Duce’s love child. But the verb vincere translates into "to win" in English, as Ida does win in Bellocchio’s biopic, not in the annals of Italian history but at least in the courtroom of public opinion. Her story had been scrubbed from history until it was recently resurrected in a couple of Italian works and now this film. And it’s only gradually and never didactically that we see Bellocchio’s devastating parallel between the rise of fascism and the bullying manner of Mussolini’s personal relationships. Bend one inconvenient woman to his will and rewrite the truth, or bend a whole nation to one’s will and rewrite history: The only difference is that of scale. Vincere shows us something we (at least in North America) know very little of: Mussolini’s background as a young man before becoming the leader of the National Fascist Party. In this film Ida (Mezzogiorno) and Mussolini (Timi) are two young lovers in mad lust for each other. At the time he is an anticlerical socialist and interventionist, a charismatic journalist whose combination of audacity and neediness that is deftly portrayed in the film’s opening scenes. Their lovemaking is passionate and compulsive. She sells all her possessions to fund his newspaper. Then he goes off to war and comes back married and a proto-fascist. Still, Ida’s ardor was untamped, as was her conviction that she had been tossed aside for a more subservient mate who would be more acceptable to the Pope, whose support the anticlerical Mussolini now sought. Until her incarceration, Ida continues to see her ex-husband as others did – in the newsreels at the movies. All Italy comes to adore the man whom she discovered first. With stunning lead performances (Timi also is cast in the role of his grown son), indelible imagery marked by shadows and beautiful period compositions (by Daniele Cipri), and an almost operatic music score (by Carlo Crivelli), Vincere is a gripping presentation of a little-known true story and its historical lessons. 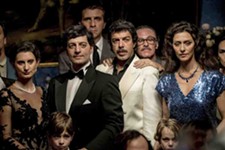