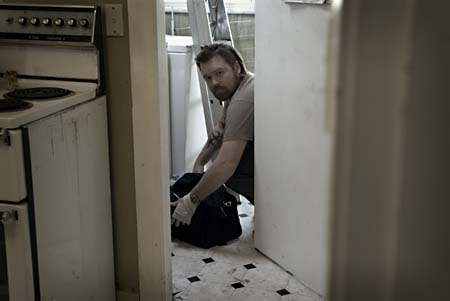 This vicious little Australian suspenser debuted at the SXSW Film Festival ’09 and then failed to materialize on U.S. screens, a disappointment that's thankfully been rectified by indie distributor Apparition (the company also responsible for picking up Boondock Saints II: All Saints Day and The Runaways). The good news is The Square is worth the wait. Rarely do American filmgoers these days get such a blazingly feel-bad slice of neo-noir played out with such grueling attention to detail and tone. With its satchel full of ill-gotten cash looming over the characters like the iconic root of all evil, The Square initially feels like a riff on Sam Raimi's early gem A Simple Plan, but, remarkably, it's that film's equal – at least, thanks to heat-generating performances from a smart, tight cast and a watertight story. Middle-aged Ray (Roberts) works in construction and appears to be leading a charmed life, until you get a glimpse of the way he looks at his neighbor's wife, Carla (van der Boom), and then you can't help but start making mental funeral arrangements for the poor sap. It doesn't aid his lust-doped peace of mind, either, when Carla's mulleted, thuggish husband, Smithy (Hayes), shows up with the aforementioned filthy lucre, nor when his dream of running away to the coast with his inamorata takes a turn for the fiery. To say more would spoil half the pleasure that comes from watching Ray and Carla slip-slide into hell without ever fully realizing they've stumbled. Director Edgerton, a former stuntman (the Matrix trilogy) displaying the intricacies that implies, mines tremendous levels of anxiety from everyday encounters and an unassuming-yet-eerie suburban-Aussie backdrop. It's a finely calibrated, spiraling lesson in what not to do when engaging in adultery, blackmail, arson, and general antisocial behaviors, and in its best moments, it recalls the everyday darkness of James M. Cain: average people doing awful things in an amoral and uncaring universe. (A correction has been made to this review since original publication.)