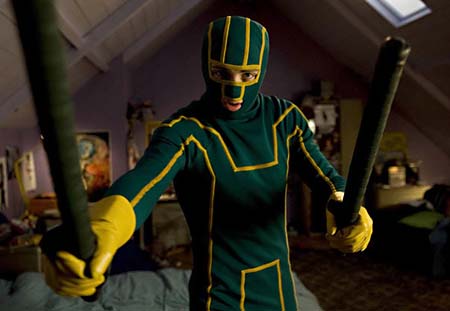 Based on Mark Millar and John Romita Jr.'s Marvel/Icon comic series of the same name, Kick-Ass asks the pointy question: "Instead of reading about superheroes and watching them at the movies, why not commit fully to the dream and become a superhero?" That's a subtext-rich leaping-off place for all manner of esoteric philosophizing on the nature of heroes – super- and otherwise – and the roles they play in our lives, but Kick-Ass never really bothers to explore its own background all that deeply and instead settles for everything the title promises and less. Johnson plays everyfan Dave Lizewski, who decides to stop fantasizing and start living the hero life before entirely thinking through the vigilante ramifications. After assembling his stridently uncool hero outfit online – a jade-green (with yellow piping, no less) wet suit and hiking boots – Dave sets out to clean up his dealer-ridden neighborhood and immediately gets the beating of his life. Minus Wolverine's adamantium endoskeleton or Peter Parker's arachnid-enhanced abilities, Dave's just a high school kid with zero latent abilities, but that first beatdown inures him (kind of) to physical pain, and Kick-Ass is born. Using the Batman rationale, i.e., Bruce Wayne entered the fray without any actual superpowers, Dave is the Timex of hero wannabes: He takes a licking and keeps on ticking, so much so that he soon draws the attention of two real superheroes, the pint-sized Hit-Girl (Moretz), whose snappy, cynical superkid is the film's most lethal, and surreal, weapon, and her ex-cop parent Big Daddy (Cage, finally getting to play Batman, more or less). With an assist from YouTube and MySpace, where he advertises his hero services, Dave and his far more professional cohorts take on local crime lord Frank D'Amico (Strong) and, unwittingly, his pseudo-neglected son, Chris (Mintz-Plasse), who masquerades as the equally goofy Red Mist. The real question being asked here is whether or not Dave is a schmuck or a genuine true believer for intentionally blurring the line between comic book fantasy and asphalt-on-your-cheekbone street-level reality, and because director Vaughn makes it so easy for me, I'm going to go with the former. Vaughn did a cracking good caper film with a pre-007 Daniel Craig called Layer Cake six years ago, but Kick-Ass has little of that film's heady panache and instead batters you about the face and neck with wildly over-the-top fountains of gore, bone-cracking slow-motion, and, yes, Cage, who dials his acting down a few notches from the kicky Herzogian mindfuckery of Bad Lieutenant: Port of Call New Orleans. Kick-Ass works the hero vibe sporadically, never fully functioning as either a clear-cut satire of modern hero-worship or a cogently kickass commentary on the same. Instead, it dwells in some morally hazy netherworld that allows it to be, technically, pretty kickass without being all that much fun. Heck, even Bruce Wayne had to go to the ninja academy. 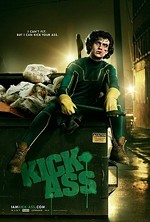 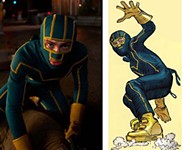 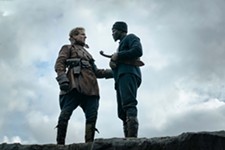