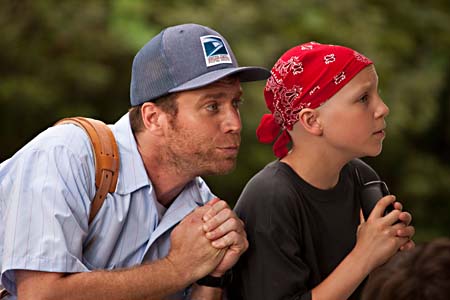 I’ve seen sick kids exploited for all sorts of reasons – usually as easy ploys to manipulate emotions but sometimes to sell things or encourage philanthropic outpourings – but Letters to God takes the cake (make that the holy wafer). The plot of this Christian-themed movie uses a kid with brain cancer as a proselytizing tool to bring people to God. The story arc is not as concerned with whether young Tyler (Maguire) will recover as it is with the lives of others whom he might save through his illness. Like God’s sacrificial son, Tyler has his own cross to bear, but his suffering will serve God’s purpose of bringing others into the light. “Quoting the Bible to me isn’t curing my son,” wails his sensible mother, Maddy (Lively), in a weak moment, but the film scurries past her outburst and back toward Tyler’s purpose-driven life of bringing others to God. Just by asking himself, “What would Jesus do?," Tyler is able to thwart the class bully and lead him to prayer. The grandfather (Waite) of his best friend, tomboy Samantha (Madison, a young actress who has a bright future ahead of her), calls Tyler “God’s Warrior” for his abilities. Then of course, there is the troubled mailman (Johnson), who begins the film as a slovenly drunk, but after months of picking up Tyler’s outgoing letters to God (God, of course, is spelled with a smiley face instead of an “o”), he, too, sees the light. Really, no other plot developments occur. There’s a conflicted older brother (Bolten), but everything is fine once his grandmother (Cheatham) helps him pray. There’s no explanation for why young Samantha lives with only her doddering grandfather. What happened to her parents? God must have the answers, but it would take a busload of faith to believe in this blatant propaganda film.

Teen Witch
The film's songwriters, Tom and Larry Weir, will be present at this special screening. The film is a supernatural comedy about a teenager who realizes ...