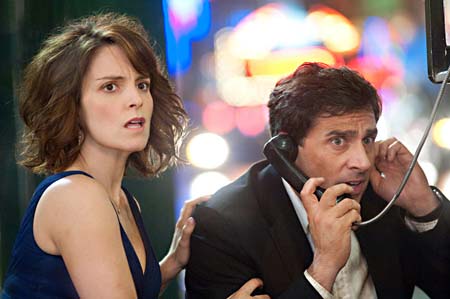 For a date-night outing unburdened by high expectations, there is no better choice out there right now than the transparently titled comedy Date Night. Carell and Fey create a totally believable portrait of a New Jersey husband and wife whose jobs, child-rearing, and home-maintenance responsibilities dominate their lives and leave little time and energy left over for romantic pursuits and time alone as a couple. Despite the suitability of the casting and the naturalistic performances of the stars, Date Night never breaks out of its dullsville rut. The film is only mildly amusing, utterly predictable, and a sad spectacle to watch, as two of television’s cleverest comic personalities (on The Office and 30 Rock, respectively) dumb down their banter to reach the broader tastes of the filmgoing audience. The trouble begins for Phil and Claire Foster (Carell and Fey) when they decide to go into Manhattan for a date-night dinner at a new trendy restaurant and, unable to get a table, pose as a couple called the Tripplehorns, who have not shown up to claim their reservations. Before finishing with their meal, Phil and Claire are forced from their table by thugs (Simpson and Common) who work for a mob boss (Liotta) who apparently has a beef with the Tripplehorns, thus beginning a long night of chase-and-escape. In episodic fashion, they encounter a sympathetic detective (Henson), a shirtless security operative (Wahlberg), the real Tripplehorns (Franco and Kunis), and a D.A. who is an Eliot Spitzer-styled duplicitous moral crusader (Fichtner). In another episodic scene back home before the commotion starts, Wiig and Ruffalo stop in for what appears to be a one-day shoot as an exemplar married couple about to break up. There is also one slow boat escape, one fast car chase, and a moderate amount of gunplay that manages to hit nothing – which may be the overriding metaphor for the movie. Date Night sprays its bouquet far and wide but is shooting mostly blanks.