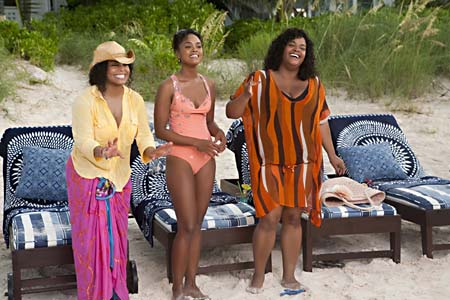 Tyler Perry's Why Did I Get Married Too?

Perry’s follow-up to his 2007 marital dramedy revisits the same couples and updates the states of their unions. Ridiculously productive, Perry again writes and directs this movie as well as co-stars, but despite his continuous output, this auteur evidences little evolution as an artist but a dependable worldview that mixes high melodramatics with wisecracking comedy and faith in the power of religion. The only question regarding one of Perry’s films these days is whether his cross-dressing alter ego Madea will put in an appearance to clarify the narrative kerfuffle in her typical smart-mouthed, gun-toting way. Why Did I Get Married Too? could have used a touch of Madea’s down-home, self-reliant wisdom to spice up the marital doldrums of these four buppie couples (and one hanger-on ex-husband). As in the previous film, the couples come together for a vacation outing, this time in the Bahamas, where they all bunk together in a big seaside vacation home. Terry and Dianne (Perry and Leal) have allowed the spark in their marriage to dwindle amid the demands of work, family, and routines. Angela and Marcus (Smith and White) bicker all the more since Marcus got a job as a TV sportscaster and Angela’s jealousy grows unabated. Angela gets all the movie’s best barbs, yet her character is also the most stereotyped as a hectoring, often drunk, man-bashing black woman. Sheila and Troy (Scott and Rucker) are newlyweds, whose move to Atlanta is stunting Troy’s manhood because he is having trouble finding work. Not helping is the surprise appearance of Mike (Jones), Sheila’s abusive ex who wants Sheila back but claims he wants to make use of his half of the time-share (even though one presumes this detail would have been covered in the divorce settlement). Then there’s Patricia and Gavin (Jackson and Yoba). Patricia is a successful self-help author who can help everyone but herself and acts like she wears the pants in the family even though her push-up bra assertively attests otherwise. Her hyper-melodramatic arc provides the film’s most momentous, if irrational, behavior and becomes the basis for WDIGMT’s disturbing finale. Also on hand to dish out some beachside wisdom is an older couple played by Tyson and Gossett Jr., two veterans whose faces always light up the screen. Little is ultimately learned, which leaves plenty of material to cover in further sequels and proves that faith in God’s plan for us requires that we do little to fix situations on our own.