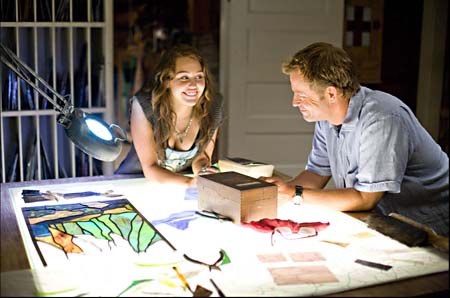 Cyrus waves goodbye to her Hannah Montana tween-star identity with The Last Song, the latest Nicholas Sparks-penned romance to be made into a movie. (In fact, it’s already the second Sparks film this year, with February’s Dear John having been the first.) Though she plays a troubled music prodigy in The Last Song, Cyrus is not heard singing in the movie until, literally, the final song plays over the closing credits. In this movie, the teen performer wants to put her acting on display, and while the movie will probably rake in big bucks from her built-in fan base (and their moms), the decision to showcase her dramatic chops may not have been in Cyrus’ best long-term interest. Marked by her bubbly and assertive presence, smiley Miley is not the best choice to play The Last Song’s rebellious and conflicted Ronnie. No doubt hoping that her appearance in this Sparks melodrama would do for her career what it did for a young singer named Mandy Moore in 2002’s A Walk to Remember, Cyrus unfortunately proves to be a bad fit for the form. The expression of dramatic complexity and nuance does not appear to be a part of Cyrus’ vocabulary (and, to be fair, are beyond the ken of most teenagers). As Ronnie Miller, Cyrus portrays a high school graduate and aforementioned piano prodigy, who goes with her little brother (Coleman) to stay for the summer with their divorced father, Steve (Kinnear), at his beachfront Georgia home. Ronnie is a handful, as they say. Ronnie quit playing piano when her parents divorced, though that impediment hasn’t gotten in the way of her being accepted into Juilliard, sans audition. Ronnie also has had a scrape with the law over a shoplifting incident. She arrives for her beach holiday sullen and aloof and quickly earns the enmity of some of the town’s girls when she catches the eye of beach-volleyball hunk Will (Hemsworth). Will also turns out to be a volunteer with the local aquarium’s wildlife-rescue team and comes to Ronnie’s aid when she tries to protect a nest of turtle eggs from raccoons. There are big kisses, a trying-on-dresses montage, the revelation of the dark cloud in Will’s past, and then, bam, somebody coughs. This being a Sparks melodrama, we know that chest congestion instantly marks a character for inevitable death. The narrative points the film hits are completely predictable, and none are developed with anything but passing interest. Veteran TV director and first-time film director Robinson moves the story forward competently, and Kinnear pleasantly modulates his performance from its usual high-octane showcase into something more subdued and genuinely supportive. The title, The Last Song, may be wishful thinking for some, but the best they can probably hope for is the close of the era of Hannah Montana movies. 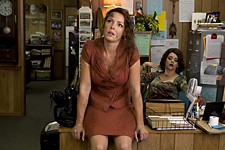 One for the Money
Heigl plays bounty hunter Stephanie Plum in this adaptation of the first book in Janet Evanovich's bestselling crime series.