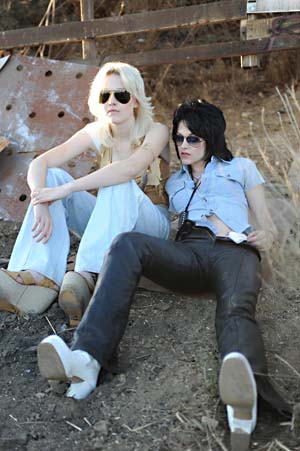 The Runaways opens with a drop-dead perfect shot and a fittingly revolutionary battle cry, courtesy of Seventies rock icon Suzi Quatro: "All my life I've wanted to be somebody and here I am/I know what I've got, and there ain't nobody gonna take it away from me/so let me tell ya what I am!" Quatro and, by extension, the members of the Runaways – guitarist and principal songwriter Joan Jett (Stewart), troubled singer Cherie Currie (Fanning), drummer Sandy West (Maeve), lead guitarist Lita Ford (Taylor-Compton), and, in the film, a fictional composite bassist dubbed Robin (Shawcat) – are wild ones. Real wild ones. And that goes double (fuck it, triple) for their Svengali-esque manager and primal mover/shaker Kim Fowley (Shannon), the crazy-like-a-fox pop-musical madman forever scheming behind the scenes. Situated nearer to the historical rock & roll record than it has any right to be – closing credits give a shout-out to Currie's memoir Neon Angel: A Memoir of a Runaway, and the wonderfully fearless Jett co-executive-produced – The Runaways nails both the glammy, SoCal temper of the mid-Seventies and the metallurgic tempering of the first all-girl rock band in America. Sigismondi's screenplay hews the story down to the marrow, focusing almost entirely on Jett, Currie, and Currie's sister Marie (Keough), with Fowley as the creepily prescient force that introduced Jett to West outside Rodney Bingenheimer's English Disco one fateful night on the Sunset Strip. From a casting angle, Twilight's Stewart is a dead ringer for the tomboy-from-hell and queer icon Jett, and Fanning's Currie looks and feels like sunny, Southern California doll parts stitched together to form a melancholy femme-bomb just waiting to blow. Shannon's Fowley is a seriously funny portrayal of a manic, conniving character; the film kicks into overdrive every time he appears onscreen. Nevertheless, The Runaways is a fairly standard rock story, albeit from a grittily femme perspective. After that slam-bang opening, the film plateaus far too early as it charts the rise (“Cherry Bomb”! Drugs! Japan!) and fall (Recording contract! Drugs! Kim Fowley!) of the band and the post-mortem birth of a Sex Pistols-influenced Joan Jett, who fucking loves rock & roll. Which brings us to the ultimate question required of a film such as this: Does it rock? Yeah, it does. It's no Ladies and Gentlemen, the Fabulous Stains, but then again, it wasn't meant to be. It's really all about maximum rock & roll suffrage, the pitfalls of sudden fame, and young women empowering themselves – if conquering the testosterone sleaze pit of Seventies rock can be called empowerment – by cranking it up to 11 and slicing off the knob. They loved rock & roll. Go put another dime in the jukebox, baby. (See "Teenage Kicks" and "Corsets and Chain Saws" for interviews with Floria Sigismondi and Cherie Currie.)