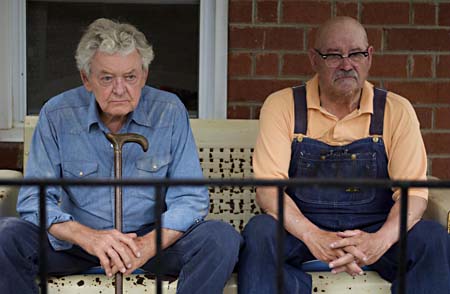 As lovely as it is to see the veteran actor Holbrook working his craft as the lead actor in this Southern-fried drama, it’s not enough to lift the movie from its sodden melodramatic roots. First-time feature director Teems also penned his film’s award-winning screenplay, but the fact of the matter is that the story resides just a few counties over from Tobacco Road. Holbrook is cast as Abner Meacham, an 80-year-old runaway from the nursing home where his son Paul (Goggins) has parked him. Abner makes his way back to his farm in the countryside but immediately discovers that his son has leased out the property to a new family: Lonzo (McKinnon) and Ludie (Preston) Choat and their 16-year-old daughter, Pamela (Wasikowska, currently lighting up screens as the title character in Alice in Wonderland). Old-school through and through, Abner has no use for young people, especially ones like the Choats, whom he regards as good-for-nothing white trash. Abner sets himself up in the tenants’ shack aside the main house and then waits like only a determined old coot can for Lonzo to sink to the level that Abner knows he eventually will. In between their mental sparring bouts, the film provides ample time to take in the sound of the cicadas while scanning the landscape. Corbin turns in some of the best work of his career as Abner’s understanding neighbor, and the original music by Michael Penn adds a nice touch. Predictable as it is, however, That Evening Sun has been a popular favorite on the festival circuit, receiving Audience Awards at the Nashville and Sarasota Film Festivals, as well as last year’s South by Southwest, where it also received a Special Jury Award for Best Ensemble Cast. (Writer/director Scott Teems will be present for Q&As following the 7:20pm shows on Friday and Saturday.) 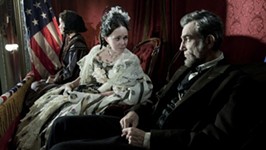 Lincoln
Despite a monumental performance by Daniel Day-Lewis, Spielberg's film has a fussed-over theatricality that's hard to escape.