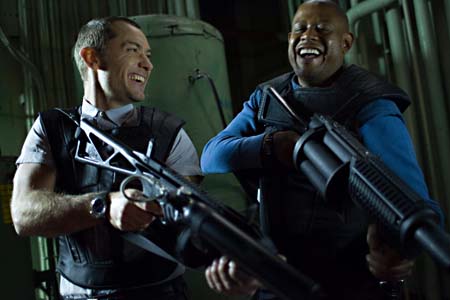 Where has all the fun science-fiction filmmaking gone? I mean the kind Ray Bradbury dreamed up, the sort of thing with zippy flying cars and the cool bebop bounce and throb of post-millennial jazz? Instead of "what if?" cinematic sci-fi has morphed into "WTF?" and now all of our futures, most of them already closely enough wound, are dystopian hellholes on par with Sarajevo, circa 1992. I'm not asking for another Buck Rogers, God forbid, but would a little more Sky Captain and the World of Tomorrow be out of the question? Dark as they are in the real world, these days have become even darker in our shared reel world, and Repo Men (which, incidentally, stars the Sky Captain himself, Jude Law) is a perfect case in point. It's the story of Remy (Law) and his partner, Jake (Whitaker), two "repo men" working for a massive artificial human-organ conglomerate known as the Union and presided over by Frank (Schreiber at his most mustache-twirlingly evil, although the mustache in question is purely metaphorical). The gist of the story – and it's a good one, too – is that in the near future, you can have your failing rock & roll liver replaced with one made of nuts and bolts and such … for a fee. And what a fee it is – usually around $600,000. Remy and Jake enter the picture when the new you defaults on the payments. They arrive in the middle of the night, with scalpels at the ready, to repossess your liver – or kidney, eyes, etc. Eventually, of course, Remy finds himself in need of a brand-new Union-made ticker. This is high-concept, dystopic sci-fi, and, by all rights, it should work just fine, but no, it doesn't: Repo Men is a snooze and a half. Law seems to be playing himself playing a variation on his character from Gattaca, while Whitaker is rehashing bits and pieces of everything from Body Snatchers to Ghost Dog: The Way of the Samurai (in a subtle shout-out to Jim Jarmusch, Jake has a pair of samurai swords on his wall). Maybe it's the obviousness of the plot – there's never any question that Remy's predicament will set him and Jake at mortal odds – or maybe we're just jaded to the point of boredom when it comes to seeing another damn dystopia unspooling up there in the darkness. I, for one, have more than my share of apocalyptic goings-on every time I wake up, and not even watching the talented Mr. Law go through the motions is popcorn enough for me anymore. 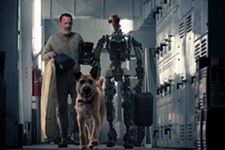 Finch
Tom Hanks and his robot pal face the apocalypse with hope.