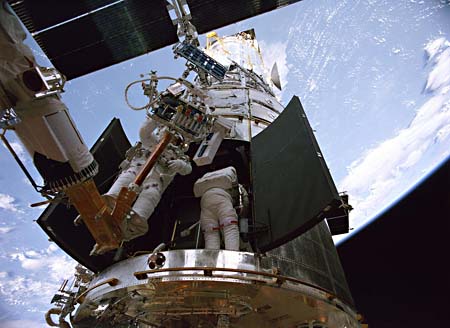 Although only a brief 45 minutes in length, this awe-inspiring film about NASA's 2009 rescue mission to the Hubble Space Telescope makes James Cameron's 2½-hour Avatar seem, well, like a cheap Hollywood movie. Knowing Cameron's genuine passion for all things scientific and wondrous – his Ghosts of the Abyss was released in IMAX 3D – I suspect he'd concur. Narrated by DiCaprio, Myers' documentary follows the May 2009 mission to repair the Hubble, which had become effectively useless due to a single warped lens. Seven astronauts were sent to rendezvous with the Hubble, necessitating what was effectively a 17,000-miles-per-hour job of parallel parking 350 miles above the Earth. That the mission was a success is no secret. Hubble's been regularly sending back breathtaking images of distant galaxy clusters and assorted other wonders. What's truly magical about Myers' film is the sheer magnitude and depth of the images when seen on the massive IMAX screen. It's impossible not to break out in goosebumps as the telescope's newest tweaks: The Wide Field Camera with infrared imaging capabilities truly goes where no one has gone before. Rocketing through the cosmos to view with pinpoint accuracy Orion's Belt and the swirling enormity of the thousands of galaxies beyond, this is the rare film that is at once a stunning technical and human achievement and a terrifically entertaining slice of science nonfiction. It's an out-of-this-world, real-life adventure for kids of all ages, budding Neil Armstrongs and Ray Bradburys alike. "Space Station 3-D"
Given the amount of cinematic science fiction in the last quarter-century, modern moviegoers may feel they've seen it all where space travel is concerned. But ...

"A Beautiful Planet"
Filmed on the International Space Station and made with the cooperation of NASA, this movie reveals humanity's impact on Earth over time.