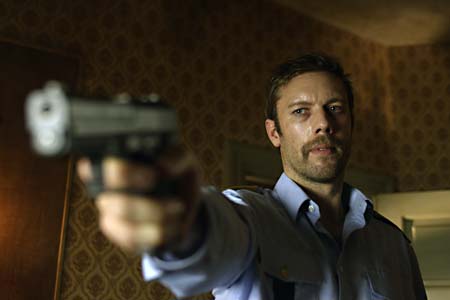 Every small town sings and staggers to its own funeral march, a bedraggled processional of what their metropolitan betters recognize as weird, queer, and just plain black-ice wrong. But like John Mellencamp said, people are born, live, and die in these divots outside the boundaries, and while it can be comforting to know your neighbors on a first-name basis, it's less so to realize you know their hearts – or lack thereof – with the same easy equality. The Danish film Terribly Happy sets itself in one of those small pre-apocalyptic enclaves, although there are no pink houses here, just the bone-chill of oppressive skies bereft of even a decent downfall. The rain, in this terribly unhappy place, drips with a dreary susurration that defines dirge, and everyone knows the words even when they aren't much more than moans in the cold Denmark dark. Set in the rancid, boggy flatlands outside of Copenhagen, Terribly Happy – both a wicked pun and an apt description of nearly every character in Genz's noirish, strange, and often very funny comedy of Lynchian locals vs. the new marshal in town. That would be Robert Hansen (Cedergren), exiled from his prior gig as a Copenhagen police officer after he … did something, you know, real bad. The rustic and, indeed, rusty town he's reassigned to watch over seems at first as though it were populated by eccentrics who’ve wandered in from the sets of Northern Exposure and Blue Velvet. However, Texans of the local persuasion, certainly, will smell the simple red reek of two-bit trouble massing against Marshal Hansen from the moment Ingerlise (Christensen), the beaten-down blonde wife of town psycho Jørgen (Bodnia), sashays into his new office with hungry eyes and multiple bruises. Those versed in the dark conscience of Ross Macdonald's Lew Archer novels may recognize the setup. Even though the whole picture takes place in an outer, boggier Denmark, the story is rotten with dead herrings. Director Genz and a mad, bad, and possibly dangerous-to-know cast of characters are augmented by some of the most comically morose art direction and downright dire locations since Henry Baskerville took to howling on the moors. And what's the story behind Ingerlise's young daughter, forever pushing what appears to be the devil's own pram before her, squeaking her way across the muddied streets on her way to seeming oblivion? Terribly Happy isn't, but it is wonderfully unhinged, and a painstakingly constructed meditation on a place where good and evil meet, mate, and make sour times sublime and, dare I say it, beautiful. The Guilty
Single-location thriller travels deep into a killer mystery