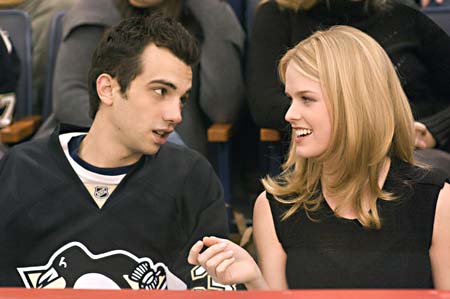 She's Out of My League

In romantic matters, like typically attracts like: Terrifically good-looking people tend to date other terrifically good-looking people, while the rest of us mere slovenly mortals make do with one another. She’s Out of My League wonders what would happen if a regular guy, unremarkable in looks, accomplishments, or ambitions, caught the eye of a woman who far outpaces him on pretty much any plane you can fathom. That is the premise and, turns out, the totality of this instantly forgettable comedy starring Baruchel (the likable lead from TV cult fave Undeclared). He plays Kirk, an undermuscled air-safety employee who does a kindness to a knockout blonde named Molly (Eve). Sensing she’s, well, out of his league, the sweet but unconfident Kirk doesn’t even try to hit on Molly, and that, it seems, is the trick to turning her head. The heat generated between dull Molly and dweeby Kirk could hardly warm a titmouse, but – as is so often the case in these romantic comedies tilted to the male perspective – Molly and Kirk’s chemistry isn’t priority. This is, first and foremost, a bromance among Kirk and his three foul-mouthed and bad-advice-dispensing co-workers at Pittsburgh International (played unmemorably by Miller, Vogel, and Torrence). They get in the occasional good riff, but we’ve seen this before. Maybe the routineness of the telling (see also: the shrewish ex-girlfriend, the adventures in manscaping, and the unfortunate ejaculate) could be overlooked if the filmmakers truly had something to say. But the script, by Sean Anders and John Morris (the same team behind the exhaustively hyped upcoming Hot Tub Time Machine), hangs every plot point and every punch line on the same unenlightened idea – that in no world could this guy get this girl. Even though She’s Out of My League ends exactly where you think it will, it does so without ever having actually gone anywhere at all. 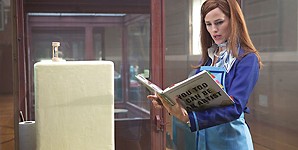 Butter
Jennifer Garner stars in this satire about a woman who'll stop at nothing to win the Iowa state butter-carving competition.