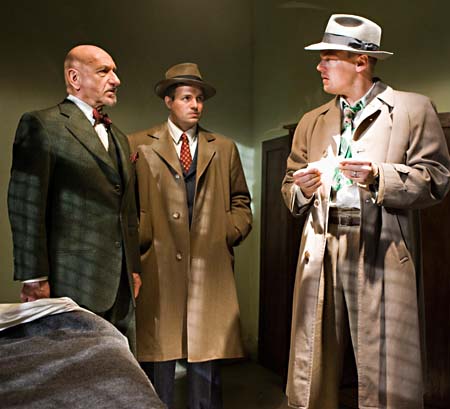 As part of his ongoing mission to lovingly re-create and simultaneously pay homage to virtually every known film genre, Scorsese has finally gotten around to doing a gothic/noir/old-dark-house/horror/mystery amalgam, and boy howdy, it's a doozy. The only thing missing is Elisha Cook Jr., and Elias Koteas does such a fine job doing the scar-faced creepy crawl that you barely notice. Adapted by screenwriter Laeta Kalogridis from the pulpy novel by Dennis Lehane, Shutter Island is nominally about the search for a missing madwoman – the child-murdering Rachel Solando (Mortimer), an inmate at the titular insane asylum – by obsessive, anxious, sweaty U.S. Marshal Teddy Daniels (DiCaprio) and his somewhat less angsty partner, Chuck Aule (Ruffalo). Teddy has good reason to stoically grim his way through Scorsese's Titicut Follies-esque fortress of sorrowtude looking as fidgety as a rat in a misfiring Skinner box: He's mentally undone by his nightmarish experiences liberating the Nazi death factory Dachau and the fiery death of his wife. Clearly, he is a man going toe-to-toe with the ultimate void. That the asylum hosts a pair of menacing apparitions in physician form (Kingsley, von Sydow) is bad enough, but von Sydow's Dr. Naehring is also a German, and a probing, poking, sinister sort at that. (As if, in Shutter Island's 1954 setting, there could be any other kind.) An obvious but no less potent metaphor for madness, the asylum is a repurposed Civil War garrison off the fog-shrouded Boston coastline and becomes an imposing and spectacularly eerie character in its own right. (The sets are despairingly realized with a dead man's palette by production designer Dante Ferretti and photographed with horrific flair by Robert Richardson.) Visual comparisons to Scorsese's canny do-over of Cape Fear are apt, but Teddy's tenuous, paranoid grip on the truth is straight out of Sam Fuller's Shock Corridor. Shutter Island may feel, on the face of it, like one of Scorsese's lesser films, but that's only because it places itself squarely in the center of what novelist Robert McCammon once called the “horror ghetto." This is low art done with high style from a filmmaker who has always known which shadows the real monsters are hiding in. From the moment Scorsese and his characters make landfall on the island – during which you can practically hear Boris Karloff intoning, "The bridge is out, I'm afraid you'll have to spend the night … m'wahahahaha" – clear through to a denouement that is no less enjoyable for onrushing obviousness, Shutter Island is a delicious echo of and stylistically masterful hats-off to Val Lewton, Robert Wiene, and all those Henry Fuselian nightmares filling the void under our beds and in our heads. It's pure Bedlam, but for genre fans, Scorsese makes it feel like coming home.