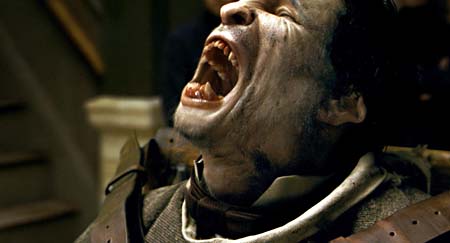 You have to wonder if director Johnston doesn't feel a little bit like The Wolfman's hirsute lycanthrope, the moon-bedeviled Lawrence Talbot. While not under a curse like Lon Chaney Jr. in Universal's stone-classic 1941 original (nor suffering from the contraction of the former’s three-word title into two), Talbot arrives onscreen looking as existentially doomed as a man can be while still appearing to share a gene pool with Benicio Del Toro. Why might Johnston feel a kinship with his toothy protagonist? The story behind the production of this remake is nearly as bleak as the film script itself, and certainly more riveting. Universal announced the big-budget remake in 2006 and then signed Mark Romanek (best known as the director of the moody One Hour Photo and the moodier Morrissey: ¡Oye Estaban!) to helm the project in February 2007, only to lose him to the dreaded "creative differences" in January 2008. Reports differ as to what state of completion the film was in when its director exited. What is known is that the studio cast about for a replacement and ended up with Johnston, an underrated filmmaker with a more than passing familiarity with genre pictures (The Rocketeer, Jumanji). They gave him three weeks to bone up on the state of the film and retool the script – credited to Andrew Kevin Walker and David Self – and let go. The Johnston production, too, was troubled with many reshoots, added effects, and a release date that wouldn't sit still. But – finally! – The Wolfman has come padding into theatres, and Johnston has clearly done his best with a difficult cinematic situation. As for Universal's monstrous legacy, this isn't the utter disaster the misguided Van Helsing was, but neither is it the stealthy, Hammer-esque dark night of the soulless that it was clearly intended to be. Despite his wolfish mien, Del Toro, as the soon-to-be wolfman, is miscast. He tries mightily to use his bearish-yet-lithe frame to increase both the character's acute mental and physical anguish, but everything following the character's return to his ancestral home and his reuniting with his equally dire paterfamilias (Hopkins, unsure whether to ham or howl) feels like a sham. More precisely, it looks like Sleepy Hollow, it sounds like a box-office coffin constructed of wooden dialogue with a Danny Elfman score nailed on, and as Universal's most beloved monster franchise after Dracula, it disappoints terrifically. It lacks the effortlessly tragic heart and soul – and humor – of director George Waggner and screenwriter Curt Siodmak's original, and it does so to such a bizarrely melodramatic degree that only its well-documented production woes can account for it. Amid the eddies of blue-tinted CGI fog and a battlefield's worth of the “red stuff” (Johnston gives John Landis' An American Werewolf in London a run for its guts in that department, at least), there are a handful of genuine emotions. Weaving (The Matrix trilogy) gives a cagey-fun performance as Police Inspector Aberline, and Malik, as the armed-to-the-teeth Sikh family servant Singh, is an interesting way to enliven what nevertheless becomes something of an old-dark-house mystery with fewer genuine frights than god-awful line readings. And what of the actual wolfman and his carnivorous lunar activities? Not good, Maria Ouspenskaya, not good. The mostly CGI transformation sequence can't hold a silver candlestick to Rick Baker's Oscar-winning, all-latex-and-spirit-gum work on the aforementioned Landis film, and frankly, Del Toro in full monster makeup looks way too much like … Oliver Reed in Curse of the Werewolf. There's plenty of doom, gloom, and outright despair on hand here but very little genuine human emotion. Ultimately that's what both separates us from and binds us to the beast within. Beware the moon, lads, and stick to the road. 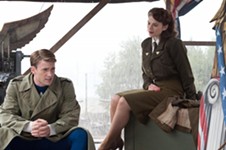