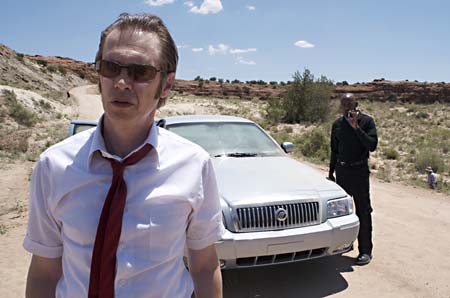 Beware the gambler, and beware your own luck should you decide to plop down any money on this loser. Although the film sounds like a sure bet on paper, Saint John of Las Vegas sadly comes up solid snake eyes. Written and directed by first-timer Rhodes, this comedy evidences little narrative logic or coherence, zero chemistry among the actors, and most sinfully, a scarcity of genuine humor. Beloved character actor Buscemi here takes the lead as the film’s title character, a casting decision that at first causes elation but only leads to massive disappointment as we watch a great actor steadily spin his wheels in monotony. The problem lies not with his performance per se, but rather the essential dislikability of the character and his inability to grow. John is a compulsive gambler who left Las Vegas when his luck ran out, then drove as far as his car would take him and thereby settled in Albuquerque. All this happened prior to the start of this film and is told to us via John’s ubiquitous voiceover. Now John works in a cubicle as a claims adjuster for an auto insurance company but still can’t resist the scratch-off lotto cards at the local convenience stores. The highlight of his day comes from joshing with his cubicle neighbor Jill (Silverman), who dresses like Lily Tomlin’s Ernestine the telephone operator and has a fetish for all things yellow and smiley-faced. When John asks his boss (Dinklage) for a raise, he is instead rewarded with a bump up to the fraud-investigation division. Partnered with Virgil (Malco of Weeds), the pair is sent to Las Vegas to look into the injury claim of a stripper named Tasty D Lite (Chriqui). They also tangle with nudists at an illegal nature compound and a self-immolating carnival geek called the Flame Lord (Cho). I know, I know; it does sound essentially decent. Yet Rhodes has no sense of how to corral these elements into a blended story. Neither can he locate the humor in his odd-couple pairings and the hangdog expression on Buscemi’s face, nor the comedic tension in some of his downright bizarre setups. In addition to Buscemi, others attached to the film with producing credits include Rhodes’ NYU professor Spike Lee and actor Stanley Tucci. Somebody among the film’s 11 listed producers should have spoken up before Saint John of Vegas hit theatre screens. You watch and wait for this underachieving film to ignite, then grow more and more exasperated as you witness its many misfires. Theoretically, Saint John of Vegas may look good from a distance, but when seen up close it’s only a house of cards.