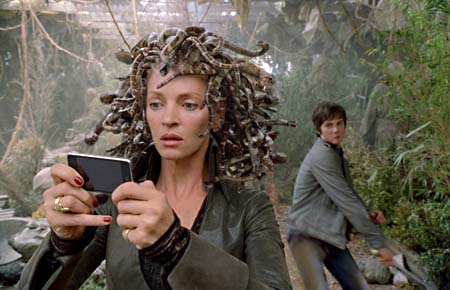 There are many reasons to check out this adaptation of novelist Rick Riordan's young-adult-oriented Percy Jackson series, but precious few of them are (presumably) intended as such. I haven't read Riordan's take on the Greek gods and their 20th century teen offspring vs. (presumably) everything, acne and all, but I'm fairly certain that only in this movie can you see the great Coogan as Hades, stroking a flaming, phallic shaft of lightning while verbally ejaculating the priceless phrase "Zeus' master bolt!" Great galloping gumdrops! How long has the twisted comic genius behind I'm Alan Partridge and Monkey Trousers been waiting to say that million-dollar line? Only the gods know, and perhaps only the gods care, but Coogan? There's a gleam in his eye that can't be missed. Other highlights include former 007 Brosnan as a very serious centaur, Pantoliano as the stinky stepdad to the half-blood son of Poseidon (Lerman as the titular Percy), and Thurman's haute-couture take on the serpent-maned Medusa, who, in the most egregious bit of overt product placement in recent memory, is defeated via the mirrored backside of an iPod. Hellacool, no? Not as such, no, but still. As scripted by Craig Titley, this first in a presumptive franchise is a dull, scattershot affair that owes much to both X-Men and Greek mythology but which never seems to slow down enough to make any sense whatsoever. It has the forced, heavy-hoofed, Minotaur-esque pacing of a Roger Moore-era Bond minus the subtlety. Expositional information arrives on the fly, literally, as Percy and his post-pubescent pals Grover the Satyr (Jackson) and Annabeth (Daddario), daughter of Athena, seek to discover who has stolen Zeus' prized bolt and why their parents are guilty of eternal absenteeism. (They also get high on the DL, aka the dastardly lotus blossom, in Vegas, but let's not go there.) There's no way to tell if author Riordan's teens ’n’ gods hybrid works on the printed page without having read it, but Columbus' film version is a genuinely weird train wreck. It might work for tweeners but will almost certainly leave budding heroes and heroines pining for the next Marvel smashdown. As for fans of real reel Greek mythology, they'll need at least three screenings of Ray Harryhausen's finest 24 frames per second stop-mo to get their heads straight. 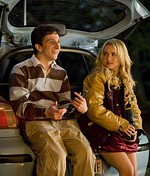 I Love You, Beth Cooper
Hayden Panetierre stars in this coming-of-age comedy about a high school valedictorian who proclaims his love for the school's hottest cheerleader during his graduation speech.