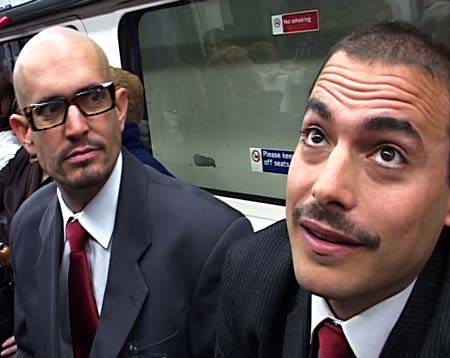 In case you haven't heard of the Yes Men, they are a pair of drolly indefatigable, anti-corporate pranksters whose ongoing efforts to expose and ridicule the evils inherent in an unfettered, global, free-market economy have been the subject of a previous documentary. This new film is an excellent starting point for anyone curious about just how craven our corporate fat cats have become. In a nutshell, Bichlbaum and Bonanno, very stylish sorts well-versed in the fine art of infiltrating the highest echelons of the global power elite (read: Union Carbide, General Electric, Exxon Mobil), select a particularly egregious and vile corporate subject and then pass themselves off as knowledgeable insiders, eager to share "new, transformative ideas" while at the same time employing some of the blackest satire since Jonathan Swift's modest proposal. Their mission? The exposure of the awful yet undeniable truth about the globalized biz whiz – those continent-spanning corporate behemoths that are willing to profit at any cost, even if that cost entails the outright murder of millions of (mostly Third World) human beings in the process. The Yes Men's hyperelaborate pranks are meant to call attention to the evils that rich, white men do to middle-class and working-class white (brown, Asian, etc.) men and women. Once again in this film, they succeed in making the big boys look like bad little boys with lethal playthings and the ethics of starving hyenas. Target No. 1 is Dow Chemical (corporate slogan: "We bring good things to life!"), having recently acquired Union Carbide, whose brand was scuttled stockwise by their lead role in the world's worst-ever industrial accident in July 1984 in Bhopal, India. (Some 3,800 were killed outright with an estimated 100,000 others instantly doomed to live the brief remainder of their lives suffering from illnesses ranging from crippling emphysema to horrific birth defects. UC ended up settling out of court.) Thus, on the 25th anniversary of the Bhopal disaster, Bichlbaum and Bonanno establish a remarkably realistic (albeit fake) Dow Chemical Corporation website and issue a "landmark" press release to the effect that Dow is, finally, taking sole responsibility for UC's quarter-century-old criminal negligence. To the Yes Men's credit, not only is the faux story picked up by all of the major news feeds (Reuters, AP) but Birchlbaum, posing as a Dow executive, is also interviewed on the BBC and the news of Dow's abrupt turnabout sends their stock prices crashing into the basement. (Dow is understandably aghast.) That's but one of several cunning stunts these anti-corporate (or, more to the point, anti-"crimes against humanity") activist-provocateurs manage to pull off. One other clever gambit is so outlandish, so Swiftian in its brazen improbability, that the positive reaction it receives from the corporate side is, frankly, nauseating (think Soylent Green). Directed and edited with verve and style, the film, in the end, is unlikely to save the world per se, but the Yes Men’s bravery and unflagging sense of optimistically doomed humor – which comes across as a quixotic version of Monty Python by way of Upton Sinclair – is to be applauded and, wherever possible, acted upon. 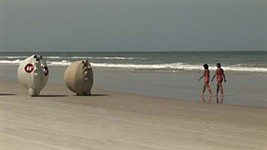 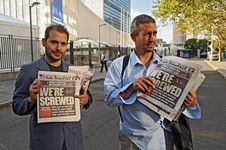 The Yes Men Are Revolting
...