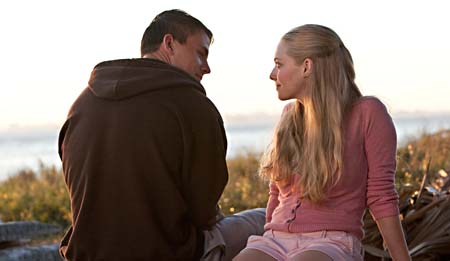 I don’t mean to argue that all romantic figures in the movies should conform to the same ideal – variety is the spice of life, after all – but was the world really begging for a leading man in cropped cargo pants? Or perhaps they’re XL board shorts: All I know is I spent a good chunk of Dear John’s first act puzzling over Tatum’s lower half, sheathed as it was in material too long to pass for shorts and too short to pass for pants. It’s a distraction, to be sure, but the filmmakers have helpfully included only the slimmest of story here, leaving ample time to wonder over Tatum’s costuming. Based on a weepie by bestselling novelist Nicholas Sparks, Dear John frontloads its action to the beginning, in which reformed hooligan John (Tatum) is home in beachside South Carolina, on leave from the Army. He falls fast for Savannah (Seyfried, sweet but underused), a saintly type passing her academic spring break building houses with Habitat for Humanity and speculating out loud that John’s shut-in dad (an affecting Jenkins) is autistic. (Turns out she’s right.) When John heads back overseas to finish out his tour, he and Savannah swap letters, which are obvious, mewling, and frankly pretty boring; then 9/11 happens and changes the course of their romantic future. More stuff happens after this, and it is as ill-defined and static-seeming as “stuff” implies. This is a muzzy picture through and through, from Hallström’s softy direction (who brings to the scenes of John seeing action in Afghanistan and Iraq all the heart-pounding excitement you would expect from the guy who directed Chocolat) and Jamie Linden’s humorless script and slurry plotting to Tatum’s portrayal of John. He is meant to be brooding, I think, but Tatum’s vague features read more “meathead” than anguished young lover. He has to carry the film, but he’s the least interesting thing going on here.