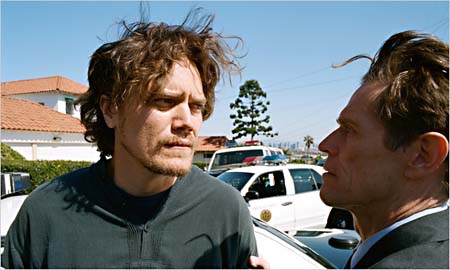 My Son, My Son, What Have Ye Done

Produced and "presented" by David Lynch, My Son, My Son, What Have Ye Done is the second Herzog film of the season (the first was Bad Lieutenant: Port of Call New Orleans) and leads one to wonder if the great director might not have discovered the fabled fountain of youth in Peru while shooting Aguirre: The Wrath of God back in '72. Certainly Herzog possesses a unique genius that allows him to incorporate into his films, documentary or otherwise, whatever his current obsession happens to be. His intensely stoic constitution and keen eye for the absurdities of his fellow human beings has resulted in a windfall of cinematic masterpieces, books, and even his own "Rogue" film school. What hasn't he done? Up until now, a good answer to that question would have been "worked with David Lynch." Now this dynamically odd couple has produced a film that, while fascinating for its pedigree alone, is remarkably chaste when compared to either one of the filmmakers’ more ambitious works. The story, by Herzog and his sometime assistant director Herbert Golder, sounds like a distillation of both Lynch and Herzog's favored cinematic grace notes, among them Peru, birds, and offbeat pacing and line delivery. Michael Shannon is Brad, a thirtysomething SoCal suburban seeker who, as the film begins, has just murdered his mother (gravely played by Lynch regular Zabriskie) with a cavalry sword. "Ever since he came back from Peru he's been strange, different," Irma P. Hall's neighborly Mrs. Roberts tells Detective Hank Havenhurst (Dafoe). The directorial in-joke refers to Herzog's epic travails shooting Aguirre and Fitzcarraldo both deep inside the green hell of the Amazon basin and atop the cloud-scouring spires of Machu Picchu. My Son, My Son … is chock-full of similar film-head nods to the respective résumés of both Lynch (coffee, coffee everywhere) and Herzog (jittery hand-held camerawork, deadly raging rivers, wild animals). Unfortunately, the end result feels more like a formal exercise in combining the hallmarks of the two infamous auteurs to see what happens, which, when you get right down to it, isn't much more than a standoff between Brad and the police. Brad's troubled history is sketched in flashbacks supplied by his girlfriend (Sevigny) and theatrical director (Kier) – it turns out that Brad was starring in Orestes, hence the sword. My Son, My Son … frankly baffles me. The tone and pacing – laconic, thoughtful, weird – is pure Lynch all the way through. So is the dialogue: "Wouldn't it be nice to live on the moon?" and "I hate it that the sun comes up in the East" are two egregious Lynchisms among dozens. But Herzog's stylistic, occasionally combative flourishes are in evidence as well, among them some swoopy Peruvian camera moves and a run-in with a herd of ostriches (one of whom swallows Udo Kier's reading glasses). To a one, the cast acts as though they were in a Lynch film, giving odd turns of phrase an even odder quality and generally acting a half-beat off of reality. By the end of this film/experiment/prank – which, to be blunt, is pretty unsatisfying – the viewer is left to ponder what it's all about, and what its purpose may have been, which, knowing Lynch and Herzog, might well be what it was about, and what its purpose was.