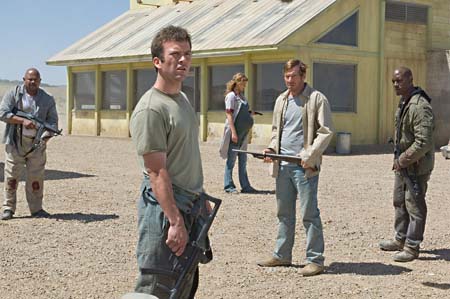 Another week, another apocalypse, another severely ripped tough guy with snow-white wings fluttering from his back. Legion – not to be confused with another winged-dude movie currently in theatres, Tooth Fairy – arrives with a great premise at its core but quickly devolves into a greatest hits repackaging of homages, lifts, and outright steals from other, better (and, very rarely, worse) truck-stop apocalypse pics. Certainly Brit actor Bettany deserves some sort of theologically bipolar acting award for playing two diametrically opposed characters in two individual films in the same month. Bettany, fresh off The Young Victoria, also stars in new release Creation as the young Charles Darwin, evolutionary genius and slayer of gods. In a twist of release-schedule fate that lends some serious credence to the notion that God is, you know, just fucking with us, Legion casts Bettany as the angel Michael, wings and all. This being another Biblically-inclined horror show, Bettany's version of Michael differs slightly from the version found in King James. He's still the commander of God's heavenly army and the Book of Revelation's prince of light, but in Legion he's also a loner, Dottie, a rebel … and – you'll pardon the cliché, but it's just too apropos – humanity's last, best hope. God, the wrathful, smitey one, has finally given up on mankind (thanks a lot, Darwin) and decided to initiate armageddon just in time for Christmas. Michael, distressed, vacates his post, shears off his wings, and plummets earthward, intent on saving the world from his former boss and his equally buff replacement, Gabriel (Durand). Long apocalypse short, Michael straps on some Israeli-made firepower (uzis!) and holes up in a rattletrap diner in the Mojave Desert. This is not just any diner, either. It's the workplace of Charlie (Friday Night Lights' Palicki), a fleshly woman heavy with God's other son. Once inside the diner, Legion's nonstop references to other films are, well, legion. John Carpenter's Assault on Precinct 13, the Robert R. McCammon-scripted Twilight Zone episode "Nightcrawlers," every dead flick George Romero has ever done, and more come to mind and bubble over into random play in Legion, making this more a horror-geek trivia game than an actual horror movie per se. With its cliché-heavy cast of diner patrons running the gamut from ornery owner Bob (Quaid) to the terrific Dutton as a Bible-thumping fry cook, Legion most of all reminded me of Maximum Overdrive, Stephen King's ill-fated car crash of a directing debut. Legion isn't quite as howlingly superbad as King's goof, and therefore nowhere near as entertaining, mainly because it takes itself way too seriously for the audience to take seriously. (It's like the Bible in that respect.) Bettany, to his credit, gives it his all, mowing down angel-possessed, CGI-malformed people by the dozen and doing his best to protect the unborn savior inside Charlie. It's almost enough to save the film from itself, but ultimately Legion feels cobbled together from odd bits of other films, which indeed it is. Did I mention this all takes place in a town named Paradise Falls? Do I need to? Thought not. If you're really that hard up for yet another apocalypso horror show, you could do worse than renting 1995's The Prophecy, which at least had the good sense to cast Christopher Walken as the angel Gabriel. As for Legion, well, if you've seen one plague of flies and death and angels at war with each other, you've seen ’em all.

Dark Skies
Aliens mess with a suburban family's peace of mind in this unsettling, slow-burn thriller. 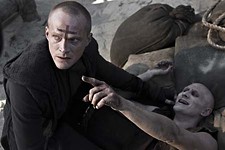 Priest
A warrior priest is on a mission to recapture his niece from murderous vampires.