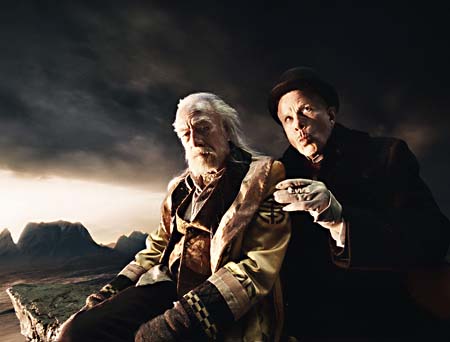 The Imaginarium of Doctor Parnassus

Plummer is delightful as this movie’s master magician and impresario of the rickety Imaginarium, a traveling road show that features a mirrorlike portal into one’s unconscious, but the real Parnassus here is Gilliam. In what has almost become his signature m.o., Gilliam rescued his film from the jaws of disaster – this time when his star, Ledger, died abruptly midway through filming. Concocting a scenario that almost works seamlessly, three actors – Depp, Farrell, and Law – were enlisted to play different aspects of Tony, the name of Ledger’s character who entices people to part with their money and trip through the Imaginarium. Upon entering the Imaginarium, people see things as they want them to be rather than as they are (look in a mirror and you’re young and thin), thus the multiple physical appearances of their guide Tony makes more than a soupçon of sense. No, this “continuity snafu” is not what undermines The Imaginarium of Doctor Parnassus. Instead, the problem resides with the story itself, or rather, the lack of story. Co-written with Charles McKeown, with whom Gilliam also wrote Brazil and The Adventures of Baron Munchausen, the scenario doesn’t contain much activity beyond the initial setup. Millennia ago, Doctor Parnassus (Plummer) gained immortality in a deal with the Devil (here called Mr. Nick and played by Waits). This has compromised the future of his luscious daughter Valentina (Cole) and has made Parnassus’ ramshackle sideshow seem an ever more obsolete attraction in the contemporary world. The troupe travels like circus performers in time-worn carts through the murk of both night and day, arriving at each destination to again pitch their tent and lure in more customers. In fact, the cloak of mist and darkness threatens to overcome the images at times. Yet wondrous and phantasmagoric sights await in the Imaginarium. Still, they haven’t enough plot to give them purpose, making the center portion of the film seem visually overwhelming and indistinct. Gilliam and McKeown toss in lots of ideas about art and life but they are more throwaway one-liners than any sustained thought process. However, a new Gilliam film is always a good reason to go to the movies, and Ledger’s final screen appearance is certainly more than a curiosity.