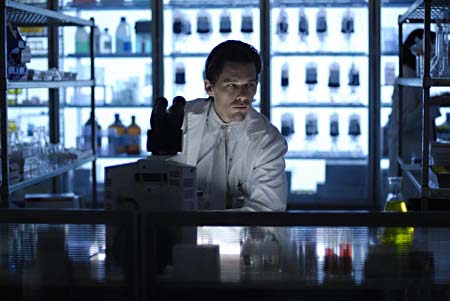 Tell any ex-smoker he has a day left to live, and I guarantee first stop will be the nearest convenience store for his preferred brand of carcinogens. The populace of Daybreakers has even less time – they're already dead, in fact; vampires, the lot of 'em – which explains why everyone smokes like a chimney. It's a topsy-turvy world where children bus to school at 2 in the morning and the local coffeehouse slings blood like java brew. But the vampire community is in crisis: With humans hunted to near extinction, there’s a serious food shortage, which is why hematologist Edward Dalton (Hawke) labors 'round the clock to come up with a blood substitute. (No luck yet: His most recent experiment ends in a gory head-spattering of the test subject.) Edward is a mournful, moral-high-horse kind of guy who gets by on animal blood and hates the rah-rah militarism of his little brother, Frankie (Dorman, one of several Australian actors recruited by fellow Aussies Michael and Peter Spierig, a writing/directing team of brothers). When a small enclave of human resistance rightly senses Edward is a sympathizer, he goes off the grid to help manufacture a cure to vampirism so improbably stumbled upon it might as well have been tied to a kite and sent out for a lightning strike. It’s a little bit silly – as is Dafoe’s Kentucky-fried cowboy mechanic named Elvis – but silly is fun. In fact, one wishes it were sillier still; Daybreakers is an ingeniously conceived, designed, and dressed piece, but whither the sex and the humor, huh? For laughs, Hawke’s ill-fitting fedora will have to do (it rides so high on his head, one wonders if there’s a Bumpit underneath). There’s no shortage of memorable images, from a human farm that recalls Coma’s creepy, hanging human shells to a shackled death march into sunlight, and the Spierigs have included some interesting philosophical flourishes. I’m not sure they entirely come to fruition, but the filmmakers must be planning a franchise: How else to explain the rushed ride off into the sunset? They're Coming To Get You, Barbara...
Fantastic Fest Round Two