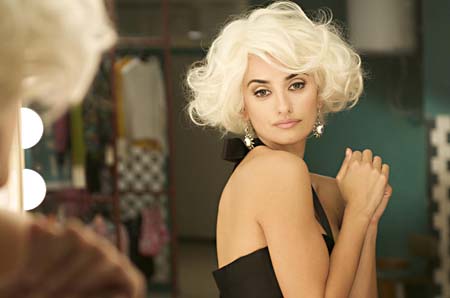 Ever the lush and melodramatic filmmaker, Almodóvar appears to be adding a bit of narrative suspense to his storytelling in Broken Embraces. Starring his longtime muse Cruz, the film is about mad love and its consequences, but Broken Embraces is as much about the art of filmmaking as anything else. It takes place in the past and the present and features characters who assume different names as the story progresses. Although it’s not particularly hard to follow, the story is convoluted, and the visuals (by acclaimed cinematographer Rodrigo Prieto, working for the first time with Almodóvar) are rich, color-drenched, and intricate. This is a movie I wish there had been an opportunity to see a second time before having to write a review. Broken Embraces is also thematically layered. Its central figure is a once-successful Spanish filmmaker named Matteo Blanco (Homar) until an accident 14 years prior to the start of the movie took the life of his lover, Lena (Cruz), and blinded him. Afterward, he renamed himself Harry Caine and became a novelist. The plot kicks into gear when a young man named Ray X (Ochendiano) comes to Harry for help writing a screenplay, and it soon becomes apparent that Ray is the son of Ernesto Martel (Gómez), the man who produced the film Harry/Mateo was working on when the accident occurred. Lena had been the live-in consort of the rich and much older Ernesto when he sent her to screen-test for Harry/Mateo’s film. Lena and the film director fell in love instantly, a development that gummed up his completion of the film. At times, it looks as though Broken Embraces might be the love child of Douglas Sirk and Alfred Hitchcock, with its dramatic broad strokes, iconic reds, and teasing narrative clues. In the third act, events seem to pile on at an excessive rate and the subplots also come into greater play. The experience can be heady and delirium-provoking, but hey, that’s cinema for you.