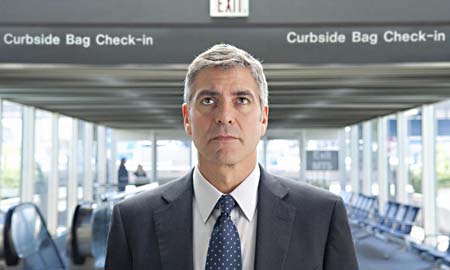 Up in the Air

Either by design or default, Reitman has customed a film perfectly in tune to these economically distressed, tetchy times, which may explain the near-universal hosannas Up in the Air has been met with. (Frank Rich likened it to The Grapes of Wrath, another depression-era product, in a column in last Sunday's New York Times.) I won't argue that Reitman hasn't made a good movie – it's his third, in fact, after Thank You for Smoking and Juno – but he hasn't made a truly great movie, not yet. Loosely adapting (with co-writer Sheldon Turner) Walter Kirn's 2001 novel of the same name, Reitman sets the film in motion with a jazzy, split-frame, opening-credit sequence that highlights how America's vistas look from up above – apropos, considering that's where "career transition counselor" Ryan Bingham (Clooney) spends most of his time. Bingham spends three-quarters of the year en route, touching down just long enough – in Milwaukee, Detroit, Wichita, take your pick – to do the bidding of companies so accustomed to outsourcing they can't even fire their own employees. But professional hatchet man is just Bingham's day job: He also has a sideline gig as a motivational speaker preaching a philosophy of detachment, both physical and emotional, and a secret dream to amass 10 million frequent flyer miles. Bingham, by choice, is a man without country or close ties, but very quickly two women arrive in his life to shake up the status quo. One is a sharp Chicago-based exec named Alex (Farmiga), who describes herself as Bingham's mirror, only with lady parts, and the other is Natalie (Kendrick), an eager-beaver new addition to Bingham's firm who has been tasked with trailing him all over the country to learn the trade. Reitman, a second-generation filmmaker (papa Ivan, director of Ghostbusters and Stripes, produces here), rather cannily elected to have the majority of the people fired by Bingham throughout the film be played by nonactors who have been laid off in the recent depression: They bring a ragged verisimilitude to the film. Yet, on the heels of an opening montage of these layoffs, Reitman inserts comic actor Zach Galifianakis as another of the newly unemployed; the previous mood, so moving, pops like a balloon. Reitman's instincts, of both timing and tone, can feel just a hair off in the film's imperfect first and third acts. (Clooney, all bobble-head charmer to begin with, also takes some time to gain traction, and Reitman indulges him with too many mugging reaction shots throughout.) But the middle is terrific, especially in a lengthy, unassuming scene in which the three leads sit, sip drinks, and have a good chat: It marks one of the great celluloid pleasures of the year, so virtuosically written, performed, and filmed is it. "Pleasure" would be the word for it: Up in the Air isn't a challenging picture, certainly not a transportive one, but it is a well-crafted entertainment made for and about adults. Sometimes, well, that's good enough.