Did You Hear About the Morgans?

From its difficult-to-remember title on down, Did You Hear About the Morgans? is a forgettable and lackluster fish-out-of-water rom-com. The film exploits tired stereotypes about city and country folks while being propped up by the kind of irrational narrative logic that can only exist in the movies. Paul and Meryl Morgan (Grant and Parker) are a high-profile New York City couple who have separated due to Paul’s marital infidelity. (No details are divulged, but you sort of get the feeling that Divine Brown might be lurking somewhere offscreen.) Paul desperately wants to reconcile and arranges a dinner date for the two, whereupon the couple witnesses a homicide during a postprandial walk. Having seen the killer’s face, the authorities decide it’s best, following an attempt on Meryl’s life, to place the Morgans in the Witness Protection Program and ship them to Wyoming. In the non-rom-com world, most cops might have them pore over fat books of mug shots, but then again, most other killers would hide out or skip town instead of racing all around risking exposure by bumping off the inadvertent witnesses. Of course, a week cooped up together out West reminds the couple of how much they still love each other, and as was declared in that great Western romance from a few years ago, “I just can’t quit you.” The movie’s wan script by writer-director Lawrence (Two Weeks Notice, Music and Lyrics) almost makes the viewer wish that actors Grant and Parker, who each here underplay their signature stammering and bubbliness, were allowed free rein to infuse their characters with greater liveliness. Used with even less regard for character definition are the supporting actors, especially Moss (so compelling on TV’s Mad Men) and Liebman as the Morgans’ personal assistants. Elliott does his usual laconic and iconic thing as the Wyoming marshal who puts the Morgans up in his home for the week. Only Steenburgen as the marshal’s gun-toting wife and partner in arrests comes out of this movie looking good. In her Western gear and with a no-nonsense attitude, Steenburgen adds a striking presence to the film. There are bears and horses and a rodeo to keep the story moving along – even a small, unnecessary role for Brimley as a quintessential Westerner. None of it feels integral to the story, and it concludes as unrealistically as it began. So now you can say, indeed, you have heard about the Morgans, smile politely, and move on to the next movie playing at the multiplex. 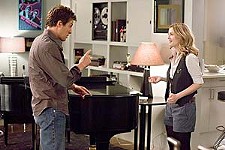