Neither the best heist movie of the new millennium (that would be The Bank Job) nor the worst (Tony Scott's snoozy remake of The Taking of Pelham 1 2 3 gets that honor), Armored is a serviceable and solid slab of testosterone, gunfire, and seriously impregnable trucks that aims low and scores higher than you'd think. It's like the Schlitz of caper movies – it goes down easily, buzzes around your brainpan for a couple of hours, and then vanishes from your memory within 24. (And considering the hangover in movie form that is The Boondock Saints: All Saints Day, hey, things could be worse.) Hungarian director Antal appeared out of nowhere to deliver a freaky-cool stunner in 2003 – Kontroll – and is currently at work directing Robert Rodriguez’s Predators. Armored continues Antal's penchant for generic, single-word film titles, but it’s such a streamlined suspenser that you can forgive the dopey bits and go with the good-men-gone-bad flow of the film, which seems tailor-made for guys' night out. Dillon plays Mike Cochrone, a longtime employee and guard at Eagle Shield armored cars who, together with a crew of five others (among them Fishburne, who appears to be having a ball, and The Professional's Reno), plans an inside job worth a cool $42 million. The only hitch in that his plans comes in the form of new guy – and decorated veteran – Ty (Short, late of [Rec] remake Quarantine), whose commitment to the plan is essential to its success. Luckily for born schemer Mike and his crew, Ty, who lives with and takes care of his younger brother Jimmy (Kinney), is on the verge of losing his home to a carnivorous bank and his brother to child-protective services. Home or heist? It's no contest. Predictably, the perfectly planned caper goes completely haywire, and new guy Ty finds himself locked in the back of an armored car while seedy Mike paces and growls outside. There's precious little new about Armored but that doesn't mean it’s boring. Antal's direction has the zip and zing (and ricocheting ballistics) of early John Carpenter (Assault on Precinct 13, the original, comes to mind) and he keeps the story front and center while avoiding any flash other than that which issues from the barrel of a gun. It's hardly a classic of the genre, but then again, like Armour hot dogs, it's comfort food for men. 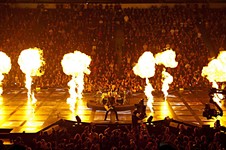 Metallica: Through the Never
The 32-year-old British quartet is shown in depth that only begins with the 3-D.