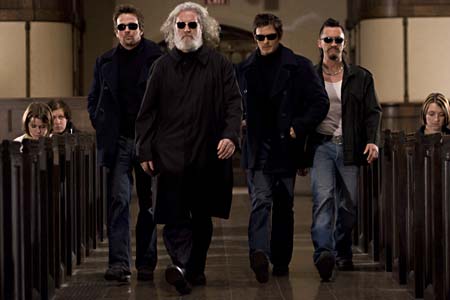 Director Duffy's wickedly bloodthirsty and strangely humorous The Boondock Saints was a cult hit waiting to happen that somehow didn't. As a post-post-Quentin-Tarantino hipster-shoot-’em-up, it seemed oddly dated back when it received a microrelease from Miramax before heading straight to video and developing a substantial following, in part due to the canny documentary Overnight, which chronicles the Boondock director's meteoric nonrise to and ego-fueled fall from indie cinema heaven. The original is all muzzle flash and zero smarts, but its loopy storyline, which has hard-drinking, harder-fighting Boston-Irish sibling vigilantes Connor and Murphy MacManus (Flanery and Reedus) laying waste to both the Italian and Russian mobs in modern-day Beantown, is delirious, brutish, testosterone-fueled un-fun. (It also comes with the bonus freak-out factor of Willem Dafoe as a Fed so far off the deep end it makes the actor's current turn in Antichrist seen downright papal.) All Saints Day, from its dullish title on down to its final bullet, is the sort of outrageously bad filmmaking that defines the phrase "unnecessary sequel." If we're lucky, Duffy's return might well end up toppling into the rarefied substrata of the fabled "so bad it's downright awesome" category, but only time will tell. For now, it's just a weird and inexplicable re-pairing of Flanery and Reedus, with Connolly as their Irish pseudo-savior Il Duce, along with a nonplot involving evil Fed Eunice Bloom (Benz, her country-fried Southern accent ranging all over the place), Russian vendettas, and tons of ridiculously cartoonish slo-mo chaos. Connolly, to be fair, has rarely been anything less than a pleasure to watch, and what little screen time he has here almost makes you wish this were a television pilot with the potential for a Connolly-starring spin-off. Also creepily endearing, sort of, is an unhinged turn from Collins Jr. as (in the film's radically un-PC vernacular) the new spic in these mad micks’ crazed Catholic brutalverse. The Boondock Saints II: All Saints Day isn't for everyone, obviously; it might not be for anyone, come to think of it, other than Duffy. Even fans of these blood-soaked bouncing Murphys might think twice before giving the downward-spiraling director a third chance.