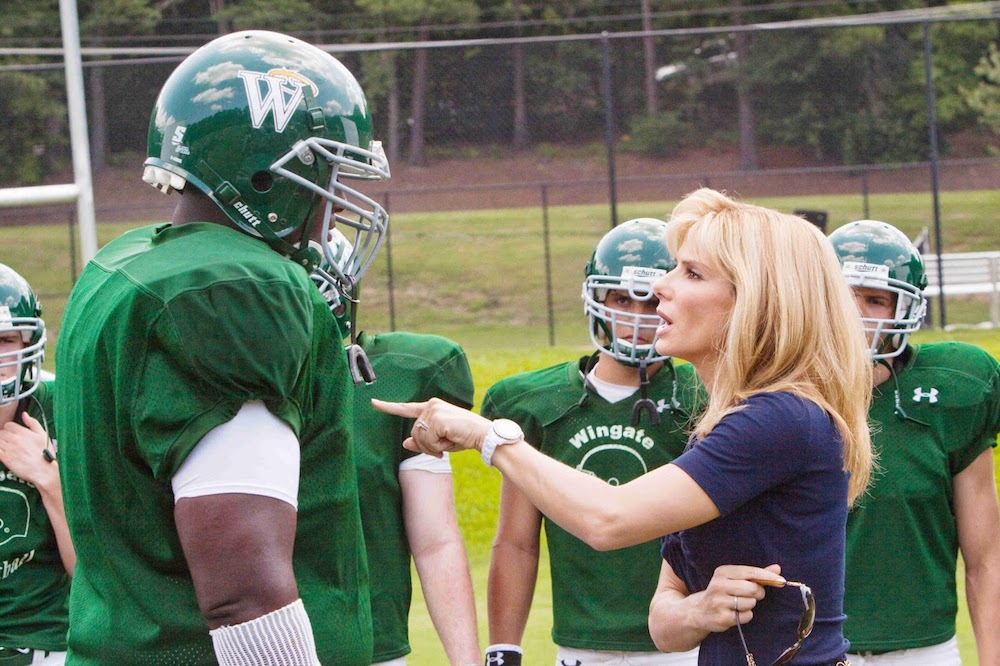 Maybe you flinched at the mawkish trailer. Maybe you already know the story – a true story about a poor black kid adopted by a wealthy white one with a happily-ever-after that ends in an NFL first-round draft pick – and worried that in no way could a studio film handle with any finesse the complicated class and race dynamics within. Or maybe you’ve just seen too many “and the crowd goes wild!” sports movies. There are a lot of built-in, probably undeserved reasons to approach The Blind Side with reservations, but writer/director John Lee Hancock (The Rookie) makes a shrewd play in the film’s opening minutes. In a kicky beginning scored by Dave Brubeck’s spare, propulsive “Unsquare Dance,” a thickly drawling Bullock narrates footage from a 1985 NFL game. In grainy video playback, we see New York Giants’ linebacker Lawrence Taylor deliver a bone-crunching sack to the Redskins’ Joe Theismann in a takedown that ended the quarterback’s career. The play also rather violently demonstrates the essentiality of a left tackle to protect the quarterback’s blind side – information that will be called upon later in the film when a homeless, hulking 16-year-old named Michael Oher (Aaron) begins playing the same position at a Christian private school in Memphis. Hancock could have delivered that information to the audience in any number of ways, and none of them would have been half so elegant and enlivening as those opening minutes. The shrewdness comes in Hancock immediately raising the bar – an opening salvo to say “quality movie coming” – so that when the film does inevitably slide into the standard tropes of sports and local-boy-makes-good movies, the effect is less rankling. (Good will established early is a lot harder to blot out than a bad first impression.) Also in the plus column are two standout performances: Aaron, as the sweet-mannered but largely uncommunicative Michael (Aaron does some very subtle body work, using the way he carries his heft as an emotional signpost), and Bullock, as the prickly, straight-talking Memphis socialite who welcomes Michael into her home and eventually makes him a part of the family. This is a dream role for Bullock – finally, a job that requires her to be adult, tart, and smart, all at once – and she makes good use of it. It’s not an altogether convincing portrait, but it is an entertaining, even moving one, and the forcefulness of her presence goes a long way in pulling the film back from the brink of cuddliness. The Blind Side – which Hancock adapted from Michael Lewis’ nonfiction book The Blind Side: Evolution of a Game – doesn’t rise to the challenge inherent in its premise: That is, Hancock mostly restricts the story’s scope to its heartwarming bits and begs off any serious investigation of race. The reason, of course, is that this isn’t that kind of movie. But I couldn’t help but wish that it were.