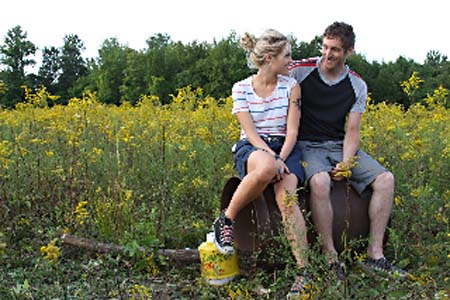 Amiable and proficient, this indie romantic comedy is never more or less than reliable. The film, which made its world premiere at South by Southwest '09, generates no great sparks but zips by pleasantly. Newcomer Middleditch stars as Justin, a directionless young man in his early 20s who lives with his single mom (Thompson) and mows lawns with his best friend, Wayne Chung (Rogel), for a living. He is ripe for the picking when a beautiful blonde with excellent cleavage cons him out of $60 at a gas station. We later learn her name is Galaxy (Taylor) and that she works for a carnival which has pitched its temporary tent in town. Despite her ruse, Justin is fully head over heels by the third time the two meet up. Galaxy introduces him to her hobby of geocaching, an activity which, to my knowledge, is making its feature film debut. Complications and tangents are piled on following the pair’s first meet-cute. She has an abusive jerk for a boyfriend (Winters), Wayne always embarrasses Justin by trying to find them an orgy in which to partake, and the local police sergeant (McDonald, who is quite hilarious) used to date Justin’s mom and wants desperately to get back together with her. There is also the issue of Grandpa (Lyndeck), who, at the age of 116, is crowned as the world’s oldest living human. (Although he is referred to throughout as Justin’s grandfather, at the end of the film Justin clearly states that the man is his great-grandfather, as if someone on the set finally did the math and determined the improbability of the age relationships, which had been bugging me the entire movie.) Given that the film’s cinematographer is Michael Simmonds, who shot all of Ramin Bahrani’s stunning-looking films, including Goodbye Solo (as well as Big Fan and parts of the documentary The Order of Myths), the prosaic look of Splinterheads is disappointing. Writer/director Sersen previously made the paintball comedy Blackballed: The Bobby Dukes Story, which kind of pegs him as an auteur of the pseudo-sports movie. Someone has already made a beer pong movie, so it’s hard to predict what Sersen will come up with next. A Frisbee golf movie, anyone? (Brant Sersen will attend the 7:10pm screening on Friday and the 12:20pm screening on Saturday for a Q&A.) 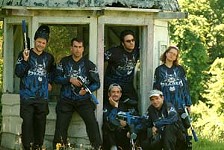 Blackballed: The Bobby Dukes Story
This SXSW recipient of the 2004 Audience Award for Best Narrative stars The Daily Show's Rob Corddry as a professional paintball athlete looking to reclaim his former glory.