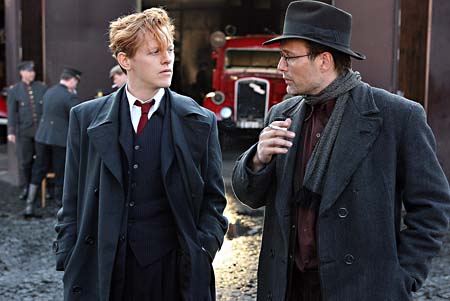 Admittedly influenced by Jean-Pierre Melville's Army of Shadows and freighted with historical and contemporary relevance, this Danish film from former Dogme ’95 member Madsen is something of a reality check in an increasingly duplicitous world that’s stuck in multiple forever wars. No matter that the events portrayed Flame & Citron are 65 years past. The themes of wartime partisan resistance (in this case the titular pair of ordinary Danes who track down and kill Nazi collaborators in the waning days of the German occupation) and the fragile, errant swing of men's moral compasses during the insidious, roiling fog of war are perpetual. War makes lunacy justifiable and turns men on all sides into madmen adrift in a sea of inhumanity. Madsen drives the point home with doomy, film-noir panache: No one is innocent, and the good guys wear black, metaphorically and otherwise, with unnerving and increasing frequency. Flame (Lindhardt) and Citron (Mikkelsen, who played James Bond's Quantum of Solace nemesis Le Chiffre) are dispatching Dutch Nazis frequently enough that the SS has put bounties on their heads. But these are not men manufactured for murder. Citron gulps pills on what seems an hourly basis and recoils (to the point of physical sickness) from the brutal acts he is committing. Flame, the cockier and younger of the pair, begins a dalliance with Resistance courier Ketty (Stengade), whose own true alliances are blurry. The pair are assisted in their deadly endeavors by the Copenhagen police and a spider-webbed network of potentially untrustworthy underground affiliates. Their killings escalate from complicit Danish men to complicit Danish women to actual German officers. It's a downward spiral of perceived heroism, made no less harrowing by the fact that the enemies are the überenemy. Mikkelsen and Lindhardt are spectacularly invested in their roles. The script (based on actual events) by Madsen and Lars Andersen wades right into the ambiguity of wartime morals and self-deceit. Beyond that is a drop-dead gorgeous period noir, rife with paranoia, femmes fatales, and good men inexorably sinking into the bloody mire and opaque texture of life (and death) during wartime. Resistance isn't futile, but it does come with its own terrible cost. 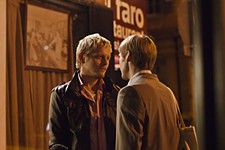 In Keep the Lights On, a spare domestic drama about addiction, filmmaker Ira Sachs makes regular use of a 1986 Arthur Russell song, “Soon-To-Be Innocent ... 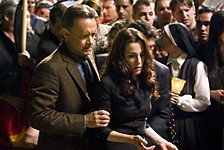 Angels & Demons
The chase is on, but there's no Holy Grail to be found in this suspenseless trail of decoded symbols.