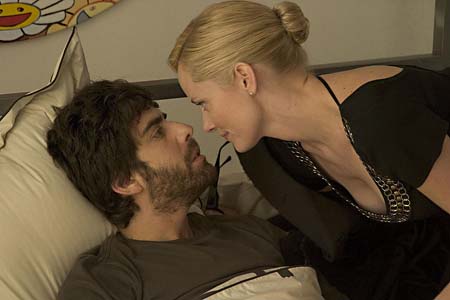 High art is both lampooned and championed in Parker’s knowing satire. Goldberg is well-cast as the movie’s brooding musician Adrian, a “sound artist” whose sparsely attended cacophonous concerts drive even his otherwise supportive parents to the exit doors. To make matters worse, his brother Josh (Bailey) is a successful artist, whose pleasing nonfigurative paintings are popular wall accoutrements in hotel lobbies and doctors’ offices. Their sibling tensions remain under wraps until Josh’s girlfriend, Madeleine (Shelton), an influential downtown art gallerist who deals Josh’s prosaic artwork in the secrecy of her back room, invites Adrian to perform in her gallery. With an interest first piqued by the unique sound that Madeleine’s synthetic skirt makes, Adrian grows increasingly attached to this angel, with whom he becomes sexually involved. The film’s plot, however, is merely a structure on which Parker hangs his mockery of modern-art practitioners and their devotees. Some of the gags are quite funny and suggest firsthand experience in the bowels of this world. Still, Parker’s satire pulls its punches. He really seems to like and admire his characters, who are somewhat reminiscent of Crispin Glover in the titular role of the nonconformist Bartleby in Parker’s 2001 film rendition of the Herman Melville story. “I would prefer not to” is Bartleby’s signature phrase, and it suits (Untitled)’s boho artistes as well. Satire without teeth is sort of a mewling entity that brings little into sharp focus. Nevertheless, the performances here are all stellar, and narrative movies that take the making of art seriously are a rare breed indeed. That may give you all the more reason to go see (Untitled). 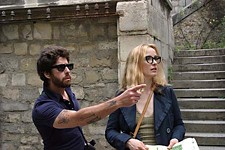 2 Days in Paris
Julie Delpy debuts as a feature-film director with this smart and funny romantic comedy.

Zodiac
The director of Fight Club and Se7en switches gears here from psychological thrillers to something that more closely resembles a police procedural.