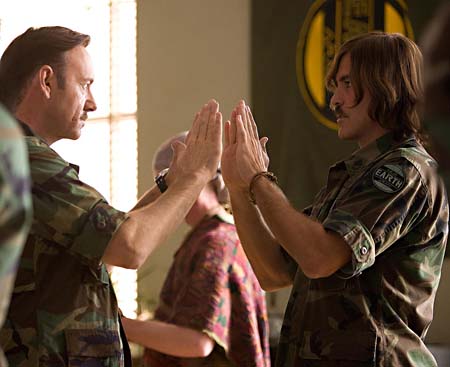 The Men Who Stare at Goats

All goats aside, this is one odd duck. A title card reads, “More of this is true than you would believe,” but it’s impossible to tell what’s factual in this fictionalized take on Jon Ronson’s book about Army experiments in the paranormal because it all sounds so deeply ludicrous. Never uninteresting – but never entirely successful, either – The Men Who Stare at Goats takes a sideways approach toward the 300-pound gorilla in the room. Reeling from his wife’s infidelity, journalist Bob Wilton (McGregor) leaves his podunk paper in Ann Arbor, Mich., seeking the wilder climes of Iraq, circa the second invasion. Cooling his heels in Kuwait, Wilton more or less bumps into the story of a lifetime, packaged neatly in the mustachioed frame of Clooney’s Lyn Cassady, psychic spy. That’s just one name for the particular breed of soldier that came out of the military’s mid-Eighties’ “New Earth Army,” the brainchild of Bill Django (Bridges), a Vietnam veteran who went out on a fact-finding mission for alternative fighting methods and came back to base six years later a long-haired peacenik proponent of yoga, juice fasts, and the possibilities of invisibility and telepathy for his newly formed regiment of “Jedi warriors.” (The goats, by the way, are used for practice: A good psychic spy should be able to fell one with a concentrated glare.) Lyn relates all this to Bob as they travel into Iraq together, and the structure is not always an elegant one: Transitions from the training camp at Fort Bragg to present-day desert play abruptly and sometimes too thematically on the nose. These flashbacks are narrated by Bob (“Lyn told me …”) without the addition of any other sources to confirm or deny, which has the effect of legitimizing Lyn’s story for the viewer (at least within the confines of the film), when it’s clear Heslov and his screenwriter Peter Straughan intended there to be some doubt for dramatic purposes. This is Heslov’s first time directing, after co-writing and producing with Clooney Good Night, and Good Luck., and there are too many tiny blunders to call his debut a triumph. He ruins an inspired climax with a generic, drum-heavy music miscue, and even the last-reel pick-me-up of Boston’s “More Than a Feeling” can’t help the film find the beat (Heslov rushes through the final sequence as if he simply can’t wait to roll credits). Still, there is Clooney’s deceptively layered performance, some startling bits of laugh-out-loud absurdity, and the not-at-all-negligible pleasure to be had in a cockeyed point of view. 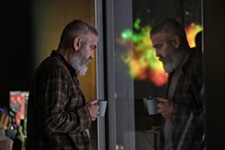 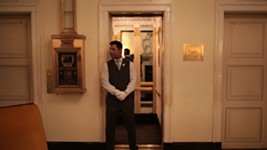