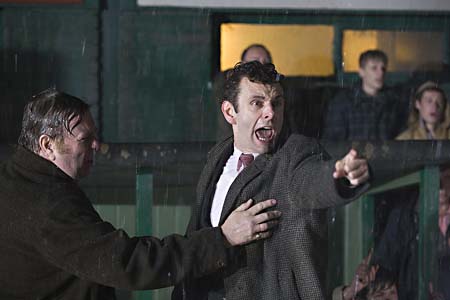 In 1974 Brian Clough served as the manager of the Leeds United Football Club for just 44 days before he was sacked by the team's board of directors for ushering in the team's worst season in two decades. His was a legendary career with an equally remarkable ending, and although The Damned United is a "soccer movie," it's also much more than that. Adapted by Peter Morgan (The Queen, Frost/Nixon) from David Peace's novel and sporting another fully immersive performance by Sheen (who co-starred in the movies based on those Morgan screenplays) as the disastrously overconfident Clough, The Damned United is Shakespearean in its tragedy. That's hardly a new viewpoint to anyone who pays attention to UK football. The history of British football is littered with self-destructive players – Manchester United's legendary winger George Best died a penniless alcoholic, for one – and equally vainglorious managers. A blow to a team is a blow to town, literally. What makes the story of Brian Clough that much more tragic is that the man, a talented ex-footballer himself, rose from the bottom of the scrum to the top of the heap in just six years and then lost it all in a month and a half. The irony is that Clough ended up coaching Leeds United, a team previously overseen by his bitter, bravura rival Don Revie (Meaney). That rivalry spans the length of Hooper's film – it's the dramatic engine the film runs on, more so than the actual footballing – and both Sheen and Meaney invest their characters with just the right amount of bullheaded stubbornness. The Damned United shifts back and forth from 1968 to 1974, weaving Clough and Revie's mutual animosity and their unlikely end game into a shroud of self-involved machismo that only ends with Clough's sacking. Back in ’68, Clough and his assistant Peter Taylor (a bearish Spall) successfully managed the lowly and virtually unknown Derby County football team to the top of the first division, where they trounced Revie's Leeds 2-1. In a clever touch that artfully mirrors Clough's inability to bond with his future team, that astonishing upset is only seen through the frosted windows of Clough's office. So tense that he can't bear to bring himself to exit his below-the-bleachers office, Clough instead chain-smokes and paces his way through the game to the accompaniment of the roaring crowd, their shadows playing on his walls. It's an amazing sequence in a film awash in arresting images and strong performances, and best of all (for us Yanks), you don't need to know your Arsenal from your Hull to appreciate the one fact of life that Clough learns too late: Pride comes before a fall, and the pitch provides no safe haven from the excesses of the self. 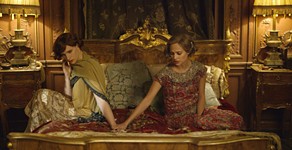