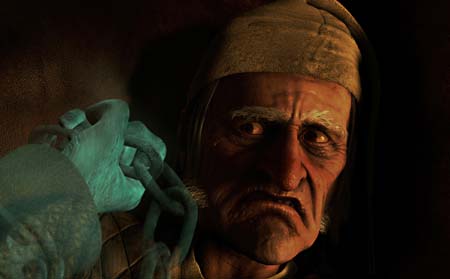 The initial “gee, whillikers” reaction to Zemeckis’ motion-capture rendition of the Dickens classic eventually turns to “bah, humbug” as the film’s technological novelty gives way to narrative mundanity. So absent is any emotional content that it’s as though Dickens’ ultimate cautionary tale is a mere afterthought onto which Zemeckis can drape his live-action/computer-animated visual hybrid that he has now used on his third sequential movie (following Beowulf and The Polar Express). Scrooge (Carrey) is still the same miserly old coot we know him to be, but instead of the transformative effect of Scrooge’s glimpses into his past, present, and future, this film emphasizes the phantasmic elements of the ghosts and the pliable mechanics they use to show Scrooge such privileged viewpoints of his life. This allows A Christmas Carol’s emotional highlight to be the gloriously lengthy tracking shot of Scrooge soaring through British airspace while he clutches the Ghost of Christmas Past as they rocket toward his childhood. Sure, the flight’s terrific, but what do they discover there? Not much, and certainly little that would scar a character for life. Most of the actors double- (triple- and quadruple-) up on the number of characters they voice onscreen. And Carrey, never a slouch when it comes to his output, plays all three ghosts in addition to Scrooge. However, the deep-set psychological possibilities of a man also being his own ghost are left largely unexplored. Carrey sheds the silliness of his well-known comic persona and adopts more of the tone and breeding of a British thespian (many of whom surround him in this movie). It’s not that Carrey fails in this serious guise, but, rather, it strips the comic actor of everything that makes him so special (and I’m sorry if that dooms Carrey to a continued future of talking out of his ass). Carrey’s face is so elastic au naturel that Zemeckis’ visual gimmickry, conversely, makes it seem mannered and synthetic. Either you cotton to Zemeckis’ motion-capture aesthetic or you don’t: To me, it seems like an awful lot of effort for an insignificant payoff. But it appears that the filmmaker is stuck on the technique – at least until holographic movie technology comes along.