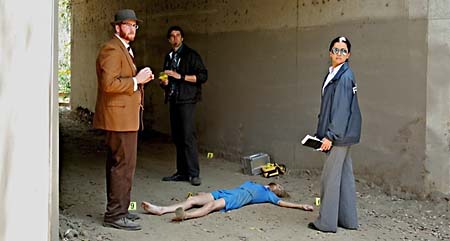 Movies and crime fit together like film and noir. In this comic murder-mystery, the talents of the Vacationeers come together to produce the visual comedy group's first feature-length film. Imaginatively composed in color and black-and-white segments that traipse across time, memory, and narrative tones, The Scenesters unfolds in the real time of a courtroom dissection and the reflective time of recollection and reverie. A would-be filmmaker (played by writer/director Berger, a University of Texas grad, along with several other members of the L.A.-based crew) takes a job with the L.A. Police Department as a crime-scene videographer. Soon he and a couple of confederates are on the trail of a serial killer, although they try to crack the case on their own without informing the cops. Soon the killer grows wise to their investigation and sends them his own movies of his crimes. Can it get any weirder or more complicated?

It's a Disaster
This dark comedy by UT grad Todd Berger is built around a likable ensemble.