If a group of friends gets together once a week for years to swap stories and share a meal, they're sociable. Put a Dungeons & Dragons rule book in the middle of the table, and suddenly they're written off as socially malformed. Rather than picking apart the world of role-playing games or mocking the players, director McAlester's documentary takes three gamers and shows how tabletop fantasy fits into their lives. Reunited with frequent crackerjack Austin cinematographer Lee Daniel (with whom McAlester made 2005’s Roky Erickson doc, You’re Gonna Miss Me), the filmmaker doesn't shy away from exploring the inherent geekiness of gamers, so recovering role-players may suffer pangs of recognition at the archetypal stretched-out Warhammer T-shirts and all-corn-snack diet. Yet McAlester’s film, which screened at South by Southwest Film ’09, cuts with sensitivity through the nerdy facade to the dedication its subjects show to their hobby in the toughest of times. Through hurricanes, failing relationships, bad career choices, and adventures in naturism, somehow, pretending to be elves and warriors remains the rock to which they can cling. As SXSW '06 award winner Darkon did for their cousins in the live-action role-playing community, The Dungeon Masters shows empathy, not condescending sympathy, for its subjects. Its ultimate message may be that, rather than gaming being a way for misfits to escape from reality, rolling the dice and spinning yarns may be what is finest and most creative about them. (A slightly shorter version of this review first ran in March 2009 when The Dungeon Masters played at the SXSW Film Festival.) You're Gonna Miss Me: A Film About Roky Erickson
Detailed here is the long, tangled saga of Erickson, the visionary lead singer of the 13th Floor Elevators, whose trip to fame detoured though mental institutions. 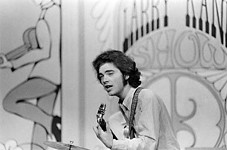