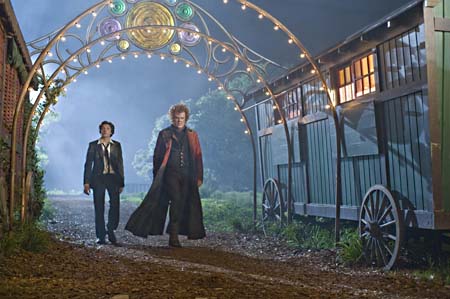 If you haven't yet noticed, there are currently two types of vampires fighting it out tooth and nail and leaving a crimson stain across the pop-cultural landscape to mark their passing, or unpassing as the case may be. On one side are the brooding (and frankly boring) hormonally conflicted teenage rebels of the Twilight series, sporting more angst than outright aggression and trying mightily to teetotal their way into polite society and – obviously, since they're eternal teenagers – the heroine's un-Lucky Brand jeans. (HBO's True Blood fits in there nicely as well.) On the other side are Cirque du Freak’s Reilly, Dafoe, Hayek, and a pair of Nickelodeon-brand teens, whose characters are but pawns in a cosmic game of vampiric brinkmanship. I'd wager the smart money's on any film with Reilly and Dafoe in it, but since both franchises are based on voluminous young adult book series, you never can be certain who or what is going to triumph at the box office. A little angst goes a long way in high school hallways, and just because the first Twilight is Harlequin romance-lite (to eyes raised on more, ah, subversive and “spurty” exercises in excessive exsanguination) doesn't mean that the bloody battle for box-office dominance is anywhere near over. Cirque du Freak is fun compared to the dour googly eyes of Twilight. It's got bite, to be sure, but unlike its chief rival, it's not afraid to laugh at itself or the conventions of the genre. It should also be noted that The Vampire's Assistant owes, at least in this first entry in the cinematic series, a huge debt to Ray Bradbury's Something Wicked This Way Comes. Massoglia and Hutcherson play best friends Darren and Steve, and as in Bradbury, they mirror and complete each other: Darren is the straight-A cream puff, while Steve dreams of cutting class and being a vampire. He gets his chance, sort of, when the mysterious Cirque du Freak blows into town and resident vampire Larten Crepsley (Reilly, hamming it up with gusto) ends up half-vamping Darren. Uncool for Steve, sure, but there are other, less peaceable vampires in play, and eventually Steve gets his dark wish fulfilled. There's plenty more going on in this artfully directed and fancifully acted anti-Twilight opening salvo, but suffice it to say that Weitz's (About a Boy) film is simply the far more inventive and engrossing teen-vamp flick. Its concerns are similar – love, death, family – but The Vampire's Assistant tackles them with a calculatedly fresh eye. It's more fun than a poke in the heart with a sharp stick.