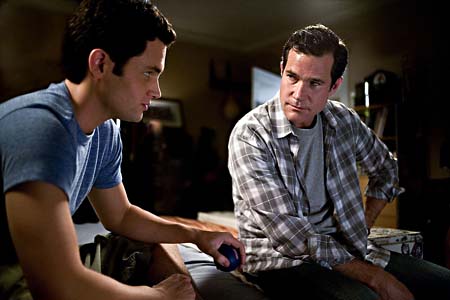 The only raison d'être for The Stepfather – a dull, plodding remake of director Joseph Ruben's brutally suspenseful 1987 film of the same name – is for fans of the original to remind people who haven't seen it that there's a far more disturbing and transgressive Stepfather available at your local indie video store. That one was penned by the late, great crime novelist Donald E. Westlake and resonated to its Reagan-era marrow with contemporary themes about the presumed sanctity of the family and the dangers of narrow readings thereof. It also featured a standout, career-defining performance from a subtly unhinged Terry O'Quinn (Lost) as a deranged family man who marries, murders, and then remarries, desperate to re-create his own twisted vision of a picture-perfect nuclear family that never existed in the first place. As written by J.S. Cardone (who recently rewrote another Eighties-era psycho-flick, Prom Night) and played by Walsh, this mad daddy feels contrived and unconvincing. He's going through the motions of O'Quinn's character, but there's no real context for his mania other than the fact that he's clearly, transparently insane. Why Ward's divorced, single mom would fall for his patently ominous schtick is unfathomable. As a result, the suspense that should be integral to the story is all but drained out like so much unseen PG-13 blood after we first encounter Walsh's "David" leaving behind his prior identity and very dead family in the film's opening. Badgley, as son Michael, the lone family member with suspicions regarding his stepfather's motives, is a gender swap from the original, but even that generates no quantifiable frissons in the viewer or the character. It's a weak remake indeed that makes you long for the bland obedience of Shelley Hack – who played Ward's role in Ruben's film – but this Stepfather manages it plenty well. 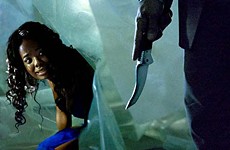 Prom Night
A remake of the Eighties horror film in name only, Prom Night is a nearly bloodless slasher film with few surprises.