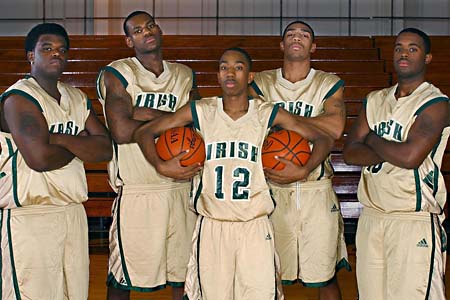 More Than a Game

Basketball superstar LeBron James, who advanced straight from high school to the NBA, appears to be such a natural phenom that it’s almost possible to believe that he sprang from the womb in full command of his abilities. This documentary shows that his achievements are grounded in his Akron, Ohio, background and his bonds to four other teammates and their exceptional coach. Director Belman, another Akron native, weaves together personal reflections, old game footage, and family photos to create a portrait of a unit in which one person’s success or downfall is synonymous with the group’s. Along with James, the team that first comes together in grade school includes Willie McGee, who leaves a troubled home in Chicago to move in with his brother in Akron; Sian Cotton, who struggles to escape the shadow of his father, who is a local legend; and Dru Joyce III, an undersized point guard who won’t allow his size to undermine his passion for the game. In their sophomore year of high school, this tightly knit group adds newcomer Romeo Travis to its circle. All the while, the teammates are coached by Dru’s father, Dru Joyce II, a novice who begins to coach in order to support his son’s ambitions. In 1999, he travels cross-country with the boys and takes them to the Amateur Athletic Union (for 11-year-olds and under) championship game, where they lose the final competition by a heartbreaking two points. When it came time to go to high school, the boys uniformly chose to go to the private, mostly white St. Vincent-St. Mary’s over the all-black Buchtel because the under-5-foot-tall Dru Joyce III had a better chance to get playing time there. When the coach who recruited them left not long after their arrival, the senior Joyce dropped his amateur status to become the school’s full-time coach, and he is shown learning nearly as much as the boys along the way. Eventually, the team was on the national radar, and James became the best-known high school player since the days of Lew Alcindor (aka Kareem Abdul-Jabbar). Complications arose due to James’ early celebrity, but none of it affected the core sentiments of the group. More Than a Game adopts a familiar inspirational structure that makes the film seem like a feature-length version of those personality pieces that are broadcast during half-time or pregame shows. The amount of early game footage will be like catnip for fans of James and the sport in general, although the amount of grainy home video may cause the interest of those with less vested enthusiasm to wane. The film shies away from asking hard questions, as one might expect from a project that was also executive-produced by James. The documentary hasn’t the depth of another study of high school ball, Hoop Dreams, and tends toward repetition, but, in the end, its heartfelt saga scores.

More Than a Game, Kristopher Belman