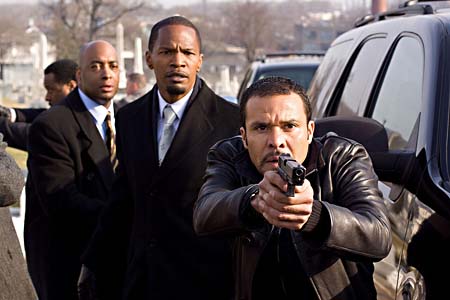 What to make of a film that opens with a brutal home invasion which leaves a mother and child dead and then uses that ghastly jumping-off point and all its circumlocutions – legal, moral, and mortal – as an assiduous flaying of the criminal justice system? Sounds promising so far, but Law Abiding Citizen ends on an even grimmer note, stuck fast between righteous indignation at our bankrupt system of jurisprudence and our (presumed) need for heroes that don't cross the line between avenger and terrorist lest they become too existentially real. Butler turns a perfectly respectable, even riveting performance as Clyde Shelton, the dead family’s husband and father, who seeks a nominal form of justice via fast-rising D.A.'s assistant Nick Rice (Foxx). What he instead receives is a quick-and-dirty lesson in the painful subtleties and Faustian backroom dealings of the Philadelphia courts: Rice, unwilling to risk his near-perfect conviction rate, nails one invader to the cruciform death drip. The other, however, gets 10 years, a fact of life (or death) that does not sit well with Shelton, who turns out to be an ex-superspook capable of drawing a perfect hand of death cards even when he ends up behind bars as everyone associated with the original case starts falling to pieces, literally. Foxx has a thankless role here. He's subbing for the entire justice system of the United States, flaws and furies included, and his main mode of expression is steely determination and precious little else. Butler, however, mines his role for some serious Old Testament wrath, and anyone arguing against the battered-looking Shelton's ridiculously over-orchestrated (but plenty entertaining) death wish is liable to look like a sap. Until, that is, Law Abiding Citizen's explosive denouement, which – oh, the ignominy! – sides with a broken system over a broken man. It feels like a lie, because it is, and lest anyone in the moviegoing public get the wrong idea, the final five pages of Kurt Wimmer's (The Thomas Crown Affair) screenplay nullify every ounce of frustration and rage brought to bear against the piss-poor judicial status quo in everything that precedes it. There's a lesson to be learned here, maybe – about the vagaries of the law, and when and why vigilante action may or may not be duly called for in the absence of definable, defensible justice – but Law Abiding Citizen, ultimately and inappropriately, tips the scales in favor of the Man over mankind. Somebody call Charles Bronson.