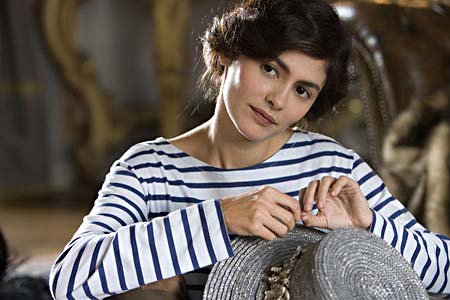 Before her name became synonymous with French couture, perfumes, and other luxury goods, Gabrielle Chanel was a girl of few prospects. By the age of 12, she was a motherless child who was then raised in an orphanage after her father abandoned his children. There she was trained as a seamstress, which is the trade she took up once she left, while also performing by night with her sister in cabarets. In the clubs she acquired the nickname Coco, a name she disliked but that unfortunately stuck. Coco (Tautou) and her sister, Adrienne (Gillain), seem to have harbored hopes for careers on the stage, although their main objective was the finding of rich suitors because, really, what careers were open in 1893 to women of modest means? Fontaine’s biopic of Chanel’s early years could be the biography of almost any upwardly mobile woman of the time. The film often calls to mind another 2009 film, Cheri, which is based on stories by Chanel’s contemporary Colette and is set among the world of courtesans and kept women. Coco Before Chanel shows us those years in which Coco lived with the aristocratic playboy Étienne Balsan (Poelvoorde) and suffered for her love of Arthur "Boy" Capel (Nivola). Mostly, however, we see Chanel as a dispassionate and aloof playmate who never finds the happiness she desires. Fontaine (The Girl From Monaco) also shows Chanel’s individual sense of style as she strips off the frou-frou from dresses and hats and – voilà – transforms articles of clothing into visions that are uniquely hers. Tautou has long sought a role that might extricate her from permanent typecasting as the elfin charmer Amélie, and she has found such a character in Coco Chanel, whose brass-tacks attitude and strong sense of self separate her from the lovelorn girls. There’s not a whole lot more to Coco Before Chanel than this. It’s a perfectly nice period piece and biographical backgrounder, but the film feels as though it’s a meal of tasty side dishes that lacks a main course. 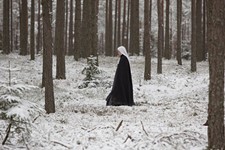 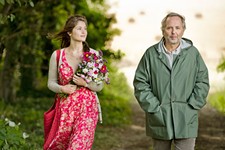