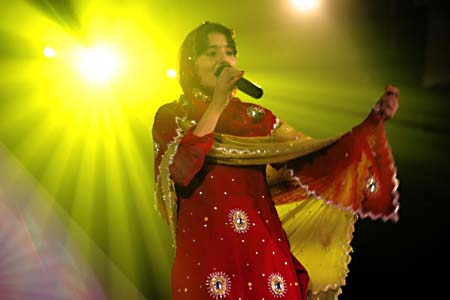 One of the more surreal docs to come down the pike in some time, Afghan Star follows a group of male and female contestants from across Afghanistan in what is essentially an Afghan version of American Idol. Shot in an iffy, hand-held style, Afghan Star intersperses these images with sit-down sequences to help rough out the backstories of the 10, then seven, then three surviving contestants until one is crowned the new Afghan Star and awarded a $5,000 cash prize in Kabul some months later. There's a slight bit of cultural crossover between Afghan Star and Suroosh Alvi and Eddy Morretti's far more harrowing 2007 doc Heavy Metal in Baghdad, but the strains of music surveyed are vastly different. Here, the directors follow two young Afghan men, Rafi and Hameed, and two women, Lema and Setara, all of whom are from far-flung, often mutually hostile regions of still-tribal Afghanistan. Lema and Setara, having breasts, are at an immediate disadvantage, but it also turns out that, in a war-decimated country of almost 250,000 square miles, much of it mountainous, only the male contestants are allowed to send their fanbases out into the country to, essentially, whip up the crowds and wheat-paste "Vote for Rafi for Your Afghan Star" on the sides of claustrophobic, bullet-pocked alleyways. The Afghan Star TV show began broadcasting in 2004 with the ouster of the Taliban and has been running continuously, if tentatively, given the number of threats on contestants' lives in this formerly no-singing, no-dancing, no-fun capital of Persia. In a country where fewer than one in 10 people have a semi-functioning television set, the fact that Afghan Star still even exists is proof that once the Taliban (who have since regained a measure of control over several Afghan regions) slipped even a little, the force majeure of some really godawful, highly Westernized Afghan pop music and hoardes of native, cash-crazed "promoters" were already in place and biding their time, just waiting to step in and bring "culture" and "modernization" to weary, war-torn Afghanistan. Now that's entertainment. If you're a nihilist. (See "You Can Sing, but You Can't Dance," June 26, for an interview with the director.)