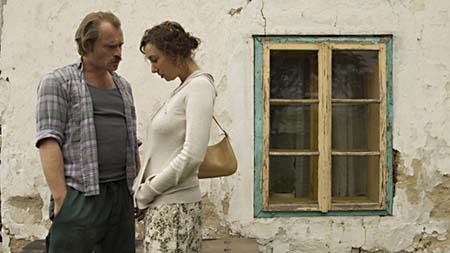 This film, Austria’s nominee last year for the Best Foreign Language Film Oscar, is a taut yet unpredictable psychological thriller that deserves wide appreciation outside its homeland. Writer/director Spielmann is a world-class storyteller who lures us in to what initially appears to be a seedy and familiar crime story about two lovers from Vienna’s lower depths who decide to rob a bank and flee to a better life in Ibiza. Alex (Krisch) is an ex-con who’s employed as a bouncer in a sleazy brothel. He’s in love with Tamara (Potapenko), an indentured Ukrainian prostitute, with whom he makes love when the boss is not looking. Of course, as these things go, his foolproof plan to rob the bank in his grandfather’s sleepy country village goes awry, and Alex holes up with his aged grandfather Hausner (Thanheiser) until he can figure out what to do. Nearby lives Susanne (Strauss), a nice woman who looks in on the old man, who hardly has the strength to maintain his farm but resists all coaxings to retire elsewhere. Susanne is married to Robert (Lust), the police officer who happened to stumble upon the robbery in progress but is unable to identify the masked gunman. The aftereffects of his actions at the scene of the crime take an emotional toll on Robert and his marriage, which was already suffering from the couple’s inability to have children. The retaliations we might expect, due to the film’s title, grow into subtle, gnawing things rather than any sort of bang-bang climax. Characters are intimately observed; their actions frequently say volumes more than their words. In his late 80s, Hausner seems to be little more than a doddering secondary character, but his silent stoicism gradually assumes the film’s moral center. There are any number of ways in which this narrative might play itself out, yet none of the likely scenarios matches what eventually occurs. Spielmann’s deft storytelling is coupled with immaculate compositions that constrain the characters as confidently as any prison bars. Revanche reveals Spielmann as a true master of his craft.