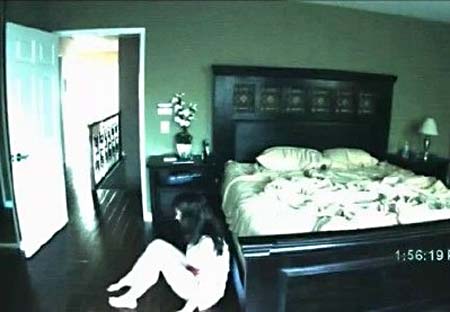 Don't believe the hype: Paranormal Activity may be a lot of things, but the words "scary" and "movie" are not among them. It is instead nothing more or less than an excruciatingly tedious YouTube gag cleverly marketed to go viral in the broadest and most box-office-friendly way. (On the other hand, Paramount's midnight-screening, street-team hype machine is to be congratulated for pulling such a fast one on both audiences and critics alike. Who says you can't have your shit and eat it too?) Like The Blair Witch Project, its far creepier antecedent, Paranormal Activity purports to exist as actual found footage – the opening text says it was discovered by the San Diego Police Department – but that's no excuse for foisting a poorly acted (whoops! make that "realistic"), shoddily conceived, anti-art-directed nonstarter that pays off only in its final 10 seconds on a gullible moviegoing public that only wants to have its collective hair raised. At 96 minutes, it's at least 90 minutes too long, and most damning of all, it's just plain dull. What little there is of a plot hangs on the irritatingly senseless, often just plain dopey suburban couple of Katie (Featherston) and Micah (Sloat). Plagued by mysterious thuds in the night, Micah invests in some pricey video- and sound-recording gear and begins taping the couple as they sleep. Precious little ensues until those final 10 seconds, and even those will arrive as no surprise to anyone who ever bothered to open one of those faddish "shocker" e-mails of a few years back (you know, the ones that guided you to a website featuring some random scene of pastoral beauty which dawdled on forever until suddenly a loud noise and a scary face blasted onto your monitor and freaked your adrenals into overdrive). Yeah, Paranormal Activity is exactly like that but without the one-trick pony grazing in the verdant field. It'd be laughable if it weren't such a flagrant "fuck you" to fans of genuine horror cinema. On a hunch, I broke out my Hellboy Ouija board post-screening and very politely asked the spirits, "WTF?" To my surprise, the planchette did indeed begin to creep across the board, but the message was always the same: "s … u … c … k … e … r." 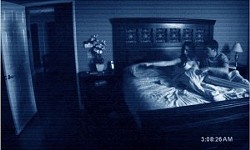 Fantastic Fest to Kick off Nationwide Sneaks of ‘Paranormal Activity’
This isn’t like chain mail, is it?