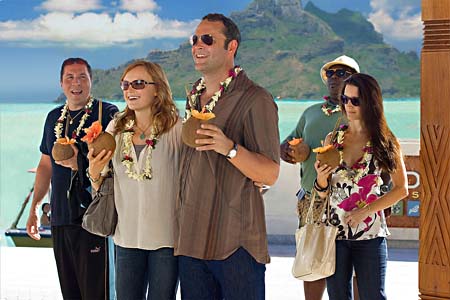 Intelligence is insulted at every turn in this new date movie from former "swingers" Vaughn and Favreau, who now write themselves roles as middle-aged men grown flabby in both body and spirit. Joining these co-stars and co-writers in this affront to moviegoers is screenwriter Dana Fox (who scripted What Happens in Vegas, another love-found-out-of-town story) and actor/producer and, now, director Billingsley (who will probably remain best known as Ralphie, the kid who sorely wants a BB gun, in the beloved A Christmas Story). Vaughn also produces and, as the film's top-lined star, plays the only happily married man in this story's quartet of couples who are induced to go on a weeklong couples retreat in support of their pals Jason (Bateman) and Cynthia (Bell), whose failed attempts to procreate have driven their marriage to a state of near-divorce. Four couples are needed in order to obtain the more affordable Pelican Package rate, but Jason and Cynthia's carefully prepared PowerPoint presentation assures the others that they will not have to partake in the resort's couples-therapy sessions. The group – including Shane (Love), the divorced man who is shown in his introductory scene as not even having enough money to qualify for a loan to buy a motorcycle – takes off the very next week for the exotic locale. Of course, nothing goes as planned as everyone is forced into therapy, where the psychobabble eats away at the various marriages (especially the one happy union) and a "couples whisperer" by the name of Monsieur Marcel (Reno in an embarrassing mankini) conducts pointless daily exercises. Several random sequences follow in succession: a badly choreographed shark attack, a massage that requires a self-serve happy ending, ridiculous therapy sessions, a Fabio look-alike yoga instructor (Ponce) who provides the requisite homophobic sight gags, and a renegade excursion to the singles' side of the resort where, magically, everything resolves. Even Shane's ex-wife suddenly materializes. Logic and credibility are defied at almost every opportunity. Even so, some of this might have worked if the script was, say, funny. Couples Retreat was edited down from an R to a PG-13 rating prior to release, though I doubt we'll discover any excised gems once the director's cut comes out on DVD. Yes, there is scenery that looks good enough to be a screensaver, as one of the characters exclaims, and of course, the background offers an endless array of scantily clad hardbodies. But before booking a ticket, I urge you to retreat. 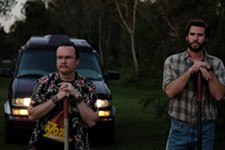