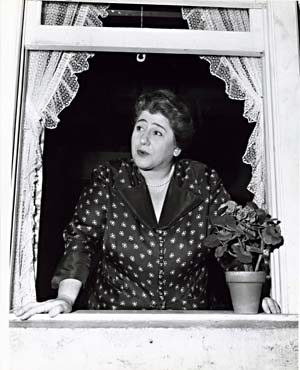 You may not be aware of it, but the American situation comedy, particularly the American matriarchal sitcom, owes its very existence to a short, rotund Jewish woman by the name of Gertrude Berg. From I Love Lucy to Roseanne and all those Web-based sitcoms not yet in existence, these TV comedies all emanate, directly or indirectly, from the wellspring of Berg's multimedia creation: the indefatigable Brooklynite Molly Goldberg. As written, the character was the loving, window-hollering head of the first patently Jewish household; she debuted on a daily, 15-minute NBC radio program that took the airwaves by matzo-ball storm just after Black Tuesday in 1929 before eventually becoming one of CBS television's very first family-oriented programs. The Goldberg character was a far cry from her immigrant roots and an even further "yoo-hoo!" from the already hoary and clichéd portrayals of Jews on stage and screen. No babushkas or I Remember Mama-isms for Molly Goldberg. Rightly identified as one of the first feminist characters to part the seas of the fledgling radio and television industries, she was a warm-hearted, pearl-necklace-wearing tugboat of a woman, nudging her sitcom brood through the as-yet-unexplored comedic channels of inoffensive and, indeed, inclusive family comedy with a pronounced Jewish immigrant tack. As CBS soon found out, Berg's keen ear for homespun yuks struck a major chord with real-world families everywhere. The message was plain: to Jews and non-Jews alike, Molly Goldberg was a family member. Director Kempner previously helmed the terrific and pioneering Jewish-ballplayer doc The Life and Times of Hank Greenberg, and while Yoo-Hoo, Mrs. Goldberg doesn't quite hit the proverbial ball out of the park with as much historical velocity as Hank Greenberg, it's not for lack of impressive firsts on Berg's part. She wrote all her own material, won the first Emmy for a female actor in 1950, battled J. Edgar Hoover and the Red Scare (to sadly little effect when it came to actor Philip Loeb, who played Molly's husband, Jake), and debuted then-unknowns such as Steve McQueen and Anne Bancroft during her CBS television era. She even directly addressed the rise of the Nazis and Kristallnacht itself in one radio episode that featured a rock being hurled through the Goldbergs’ window by some unknown anti-Semitic hooligan. Kempner marshals an impressive lineup of both Berg and Goldberg fans to underscore the irrefutable significance of her subject, among them Supreme Court Justice Ruth Bader Ginsburg, Norman Lear, and and NPR's Susan Stamberg, who reminisce and expound at length about the cultural relevance of all things Goldbergian. Best of all, though, is the kinescope footage of the televised version's early episodes, which eerily resemble nothing so much as every other TV sitcom to follow, Seinfeld included. 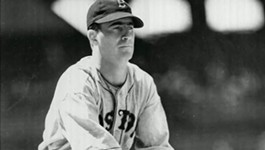 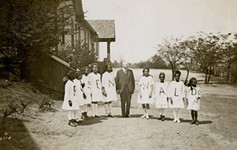