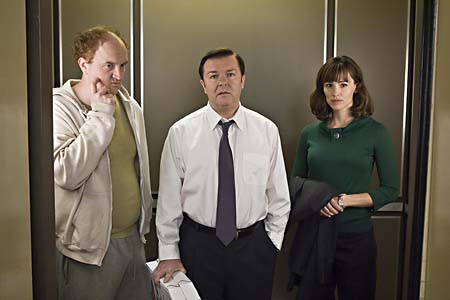 The Invention of Lying

The Invention of Lying is Gervais' first feature film as a co-writer and co-director, and, to no great surprise (at least not to any fan of the British funnyman), it is engaging and clever, if inconclusive. Gervais' real accomplishment, oft-overlooked, is as an actor, in how he can embody characters on a sliding scale of unlikability and bring humanity to them again and again, from the boorish David Brent on the BBC's The Office (which Gervais conceived with owlish collaborator Stephen Merchant, who cameos here) to the feckless Andy Millman on Extras and the dentist misanthrope Bertram Pincus in last year's underseen charmer Ghost Town. At first glance – or even 15th – there's not much to like in these characters, but Gervais keeps plugging away at these tragicomic figures, gifting them startling moments of grace amidst their endless blunders. He sets the bar especially low with his Invention of Lying character, Mark Bellison, a self-described "chubby little loser." It's a commonly held opinion, one Mark knows all about, because in this alternate universe, lies don't exist and the truth is delivered regularly – from co-workers, love interests, the waiter – like a punch to the face. (One might quibble that there is a distinction between not lying and spasmodically announcing aloud every harsh or embarrassing thought, unprovoked, but oh well.) Newly unemployed and snubbed by the woman of his dreams, Anna (Garner), for being a less-than-ideal "genetic partner," Mark is staring into the abyss when he discovers, quite by accident, the world's first lie … and cue the floodgates. Most of Mark's lies are small potatoes, but then he tells a humdinger of one. While comforting his dying mother, Mark assures her she'll be going to a better place (mansions, ice cream, no pain, etc.), and in the process, he invents heaven – or the idea of it, at least, which is enough to rock the planet. Mark as accidental prophet makes for some very funny stuff; when asked to elaborate, he invents God next, or "the Man in the Sky." Gervais, an atheist, gets in his digs (a newspaper headline reads "Man in Sky Continues to Give AIDS to Babies"), but there's nothing particularly incendiary here, and especially not when the romantic subplot shifts to the forefront. If anything, The Invention of Lying is too soft for the satirical promise of its premise. It's still quite funny, and it never scolds in the manner that "God-swap" films such as Bruce Almighty tend to. But next time out, one hopes that Gervais – not just a tremendous wit but a genuinely subversive talent – will sharpen his talons.